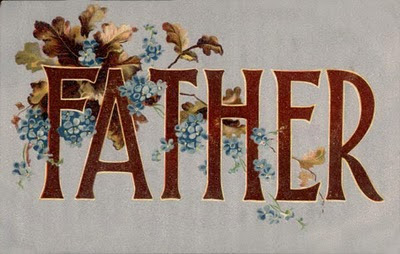 Father's Day is celebrated on third Sunday in June in many parts of the world.  In 1909, Sonora Smart Dodd thought up the idea for Father's Day while listening to a Mother's Day sermon.

When her Mother died, Sonora's Dad had raised her to adulthood.  She knew all the sacrifices he made for her and saw him as a courageous selfless and loving man.  Sonora wanted her Dad to know how special he was to her, so she went to work on a national day to honor all Fathers. The very first Father's Day celebration was held on her Father's birthday, the 19th of June, 1910.

Posted by Beth Niquette at 7:11 AM

Hi Beth, great Father's Day postcard. My early Father's Day present would be for England to win against Algeria later this evening ... I'm sure my kids can arrange that for me :-)

great card and a timely reminder to call my dad on sunday! i had no idea that father's day had existed for so long - i'd always assumed that it was a "modern" and more commercial invention! happy PFF!

Very interesting history! I didn't know the part about the roses.

Those vintage letter cards are so beautiful. Happy PFF.

Nice post, Beth!
Fathers...In Louisiana, if I remember correctly a radio program, 85% of the prison population grew up without the [biological] father, and most of them without any father whatsoever.
In an African reservation for orphaned elephants, the young (<21 yrs old) males grew aggressive, even killing rhinoceros at the waterhole.
Until two much older, senior male elephants have been brought there, on purpose.
Aggressivity stopped. Wonder why?

Loved reading about Father's Day - and was also surprised that it has been celebrated for such a long time. Hope all the dads out there have a great day! Carol

Happy Friday, Beth!
Thank you for the link! I am most grateful the exposure to my blog. I assumed one had to have a postcard to share, so that is why I never linked to you but once. :)

Wishing you a most glorious weekend! I do hope the sun is shining over there for you as it is over here! Finally! :))

A lovely story about the reason for father's day. What a simple but pretty card.

that's very interesting. I had never heard any of that before. Happy PFF!

Thanks for the history. I didn't know how Father's day got started or about the roses.

Here's to a great father's day to all the fathers out there!

Great information on the background of Father's Day! From a humble beginning comes an international celebration! In Australia, it is celebrated on the first Sunday in September! Strangely, this is round the time of Hindu tradition!

And thank you for linking this post to my Weekend Mailbox meme!

Have a wonderful weekend!

THANK YOU BETH for sending some viewers over to my new vintage blog.
I don't understand this Friendship Friday thing, would love to participate maybe you can break it down so I get it ???
Yes sweetie I closed the Friendship blog, I got annoyed that no one besides the 4 us was coming there anymore maybe you could start a new one, they would all show up for you I bet :)

I wish I could visit my dear Dad on Sunday but he is gone on to his Glory. Sure hope your Dad is doing much much better. Did you ever do any of the ATC's yet ??
Thanks again, and remember how much I love you and Clytie.

Hey sissie, I'm so glad you added the link to Weekend Mailbox! These two memes seem to be made for each other!

And I love the information you found on Fathers Day. Especially about the roses.