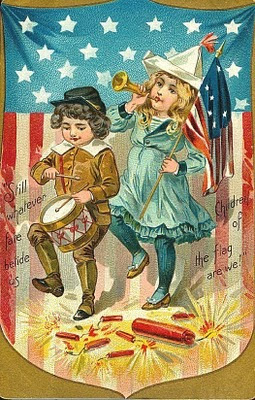 I've always thought it wonderful that countries of the world each have a flag to represent them!  In America, we celebrate our Flag on June 14.  On that date, in 1777, the Continental Congress passed a resolution specifying that the flag carry 13 stripes and 13 stars. The colors would represent hardiness and valor (red), purity and innocence (white), and vigilance, perseverance and justice (blue).  Over the years, as stars representing each state were added to the flag, the design changed to what it is today--white stars in a field of blue next to red and white stripes .

In 1885, a Fredonia, Wisconsin schoolteacher, B.J. Cigrand, arranged for the students in his school district to celebrate Flag Birthday on  June 14th!

Then, in 1889, George Balch, a kindergarten teacher from New York City, planned similar festivities for his school’s students. In 1893, Philadelphia became the first city to celebrate Flag Day and the following year, New York was the first state to observe June 14th as Flag Day. In 1916, after decades of expanding community observances, President Woodrow Wilson finally established Flag Day on the calendar.

But it wasn’t until 1949, that National Flag Day was officially observed every June 14th. The United States Flag Code, as adopted by Congress, states “The flag represents a living country and is itself considered a living thing.”

Posted by Beth Niquette at 6:07 AM

A disturbing card with all that dynamite at the Children's feet (: Happy PFF, Beth.

Lovely card! I had no idea there was such a thing as Flag Day. Thank you for all the interesting information.

Happy PFF! :)
I hope the children won't have a blast.

fascinating post...you've got me googling flags like mad! have had an interesting afternoon reading about colours, ratios and all sorts of flag rules! happy PFF!

Wonderful post, Beth. Flag Day ... one of those we forget all about. !!! Flags are so interesting.

A very important omission about Flag Day ... the day the world was blessed hrmmph years ago ... with the birth of my SISTER!!!

I realized I try to be so diligent about hitting every blog, that I often forget to make a comment on yours. Mea culpa! And I hope not to forget again. :)

Very nice card! My daughter is into drawing different flags. She gets out the encyclopedia and looks up the ones she likes and then makes them for her room. She'll will be excited when I tell her about flag day!

They better watch where they step so that they don't step on the 4th of July firecrackers.

Isn't it amazing how one feels such a sense of swelling pride when they see their county's flag flying ? ... Wonderful post, Beth! ~ Have a fabulous weekend!

Interesting history, as always! The flag's birthday, how fitting. Had no clue about the day's origins. Happy PFF!