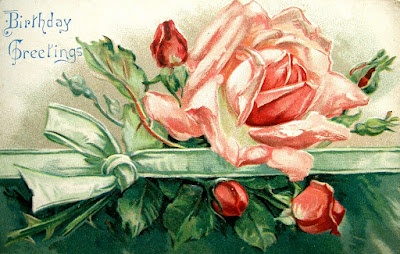 I remember the day my youngest sister was born.  I was fourteen years old and she seemed so tiny and fragile.

Now she is all grown up with a beautiful child of her own.  These days I have the lovely privilege of spending a lot of time with her.  We often will say the same things at the same time, and there are times I know exactly what she's thinking and vice versa.  Having a little sis is a LOT of fun.

I love my little sister.  She is one of the lights of my life--and a precious gift of the Lord to fill the emptiness of my home after my husband passed away.  I am truly blessed.

Posted by Beth Niquette at 6:39 PM No comments: 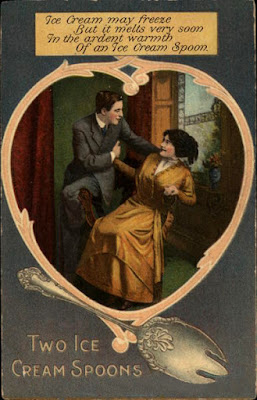 This postcard features ice cream spoons.  I have tried to discover the history of the ice cream spoon, but was unable to unearth much of anything!  I did, however find a lot about spoons.  The first time the ordinary spoon was mentioned comes from England in 1259 when it was described as a part of the first King Edward's wardrobe!  In that time spoons were not only used for eating, but were worn as a mark of wealth and power.  In fact, the coronation of every king of England was followed by the ritual "anointing" of the special spoon.

There are spoons for eating just about anything--including ice cream.  Some ice cream spoons have a fluted side to them, others are like today's "spork."

He recognized ice cream as a delicious, nutritious food enjoyed by nearly 100 percent of the nation's population. In this important proclamation, the president called for all people of the United States to celebrate various events honoring ice cream with all due "appropriate ceremonies and activities."

Ice cream may seem like a small bite of summer, but in reality it is wildly popular year round.  The ice cream industry in the United States contributes more than $39.0 billion to the national economy and creates more than 188,000 jobs in communities across the country.

As for me?  I love all kinds of ice cream—but French Vanilla bean is my favorite.  What is yours? 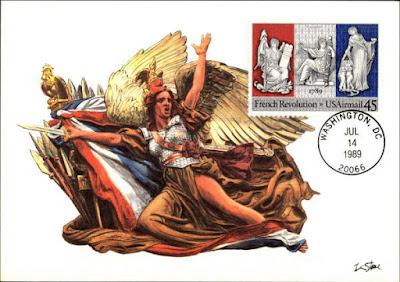 What is a Bastille?  One can discover a lot of information by looking at the origin of words.  Bastille is an alternate spelling of bastide, which means fortification.  Bastide, meaning "built," originates from the ancient Occitan language of southern France.  It also has the idea of troops watching over a prison.  In ancient times, a Bastille was a fortification often used by royalty to imprison their enemies.

Bastille Day is a national French Holiday commemorating the storming of the prison of Bastille on July 14, 1789.  That victorious battle marked the beginning of the great French Revolution.

In those days, the Bastille had come to symbolize the absolute and arbitrary power of King Louis the 16th. When the French people captured the Bastille, they proclaimed their freedom from the King’s oppressive rule.

Though the Bastille held just seven prisoners when it was captured, seizing the prison became a symbol of liberty and of the people’s fight against tyranny.  This is when the Tricolor flag was first flown, symbolizing the Republic's three great ideals: Liberty, Equality and Fraternity for all French citizens.

The capture of the Bastille marked the end of absolute monarchy.  It led to the birth of the sovereign Nation of France and eventually, in 1792, the creation of the First Republic.

La Marseillaise was written in 1792 and declared the French national anthem in 1795. The words of this song are profound and heart-stirring.  If you get the chance, read the words--and listen to the music.  It is beautiful.

On the first anniversary of the fall of the Bastille, delegates from every region of France gathered in Paris to proclaim their allegiance to a single national community during the Fête de la Fédération — it was the first time in history a people had claimed their right to self-determination.

Benjamin Raspail, a politician and painter-engraver during the French Revolution recommended July 14 should become a yearly celebration.  And so July 6, 1880, Bastille Day was declared a National French holiday.

Just as in the United States, where the signing of the Declaration of Independence signaled the start of the American Revolution, so in France the storming of the Bastille began the Great Revolution which changed the face of France for all time.  In both countries, a national holiday symbolizes  independence, a new form of government and freedom from tyranny.

To this day, the capture of the Bastille has great significance for the French people.  The holiday symbolizes their freedom from oppression and commemorates the birth of the Republic of France.  This celebration of freedom continues in modern times, as Bastille Day.

Have a lovely weekend and Happy Postcard Friendship Friday!

Posted by Beth Niquette at 1:00 AM No comments: 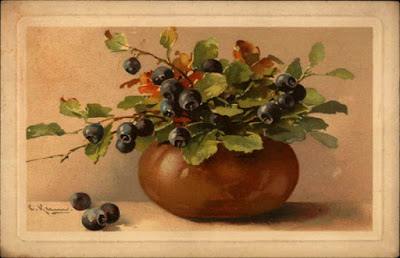 Happy National Blueberry Month!  This is a relatively new holiday.  In 1999, the United States Agricultural department proclaimed July to be National Blueberry month, because that’s when the delicious native berry is ripe and ready to harvest.

Blueberries have had a big influence in my life.  When I was small Daddy planted a half acre of blueberries, which we harvested each summer.  In the middle of the blueberry patch was a little garden--it was all mine and I loved it.  I would pretend I was on a garden island in the middle of a blue sea.  That was over 45 years ago.  Some of those blueberry plants still survive and are taller than I am—they are like blueberry trees!  And their fruit is still delicious.

Blueberries are native to North America.  The American Indian had another name it—that of the Star Berry.  This was because the blossom end of each blueberry formed a five point star. It was believed the Great Spirit, responding to the cries of starving children during a great famine, sent star berries to save them.

The Natives often dried and smoked the pungent berries to eat during the barren winter months.  They used blueberries for seasoning too--pounding them into raw meat, then smoking and drying it.  The berries were also dried, beaten into a pulp and combined with cornmeal, honey and water to make a tasty pudding called "Sautauthig."

Native Americans also used blueberries for medicinal purposes.  They made a strong aromatic tea from the root which was used as a relaxant during childbirth. Early medical books show this same tea was used by settlers for "old cough" and easing labor pains.  Tea made from wild blueberry leaves was believed to be a tonic to help purify the blood.

All this talk about fragrant hot tea and blueberries is making me hungry! Have a lovely weekend and enjoy those blueberries! Happy Postcard Friendship Friday!

Posted by Beth Niquette at 3:30 AM No comments: