Christmas Kittens in a Basket 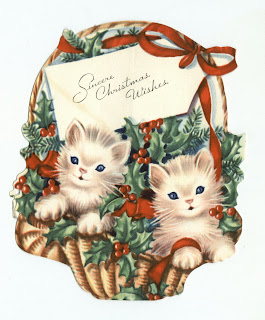 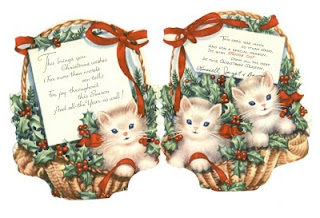 Merry Christmas! I love this time of year. There is something so joyous and perky about red and green decorations, the lights and music. Here is another of the wonderful cards from our sweet Grandma Jenny's fabulous collection!

Sweet Grammie flew away to heaven awhile back. Sharing the cards she loves brings her close to my heart.

She Walks with Turkeys 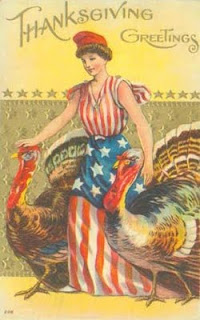 I don't know why, but this wonderful postcard, part of my cyber collection, tickles my funny bone! (grin) These turkeys seem like a couple of lapdogs, with Lady Liberty's right hand resting on the grizzled head of one old turkey, as she gently herds the other proudly strutting bird with the other. This whimsical postcard is a part of my cyber postcard-collection. Many and much thanks to our friend Pearl for her generosity!

I am not sure about cherubs cooking Thanksgiving dinner in the first place--it seems they might trip on those darling chef's gowns and dump that heavy turkey--and what IS that big red thing atop the turkey? Perhaps a rose??? (grin) Your guess is as good as mine! 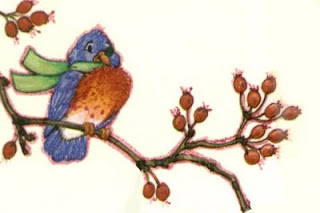 This cute little bluebird was an old card Mumsie made into a gift tag using rick-rack scissors. I loved that cheeky little blue bird so much I kept it.

Daddy Update: Great news! Dad has formally been discharged from the wound specialist. The top of his head is completely healed. He has also been fitted for a more comfortable neck collar to support his still-broken neck.

However, Dad is still having flashbacks to his time in the prison camp--they are even more vivid than before. Yesterday Dad went to the VA Hospital for some tests to find out why. I would appreciate your continued prayers for the healing of Dad's neck and the cessation of those flashbacks. Mom would appreciate your prayers, too. This is all very hard for her.
Posted by Beth Niquette at 5:39 AM 7 comments:

Joseph and His Bride - Festival of Postcards 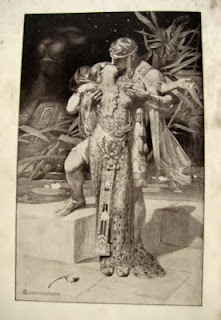 This wonderful illustration was done by J. C. Leyendecker. He became well known for his use of light and shadow within shadow. He was the premier cover illustrator for The Saturday Post for much of the first half of the 20th century. Leyendecker was mentor and friend of Norman Rockwell, who was a pallbearer at Leyendecker's funeral in 1951.

This postcard is my submission for the Festival of postcards - White. Here is Leyendecker's fanciful illustration from the ancient story of Joseph found in Jewish history. We do know Joseph married and had children, but nothing is said of his wife--pictured here. Some say she was a high-born Egyptian Princess. I like to think so, and I love this illustration because of its beauty and passion.

Joseph dreamed his brothers and family would bow to him one day. His father clearly doted upon the boy and gave him a beautiful multi-colored coat. Joseph's brothers became so jealous of their younger brother, they sold Joseph into slavery and told their father he had been killed by a wild animal. In Egypt because of his honesty and fairness, he rose to great heights, only to be falsely accused of rape and thrown into prison.

When his brothers came to Egypt seeking grain, they did not recognize their own brother. In time, when Joseph revealed who he was to them, they became afraid. But Joseph told them, "Do not fear. You meant this for harm, but God used it for good."
Posted by Beth Niquette at 8:11 AM 5 comments:

Cat Hat and the lil' Girl 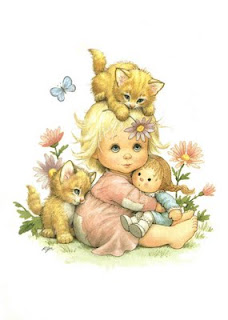 Here is another card from our Grammie Jenny's collection. This card reflects her great love for small children, animals and flowers.

Grammie's immense flower garden was filled to the brim with lovely flowers of all kinds. There were unexpected little nooks where deer, flamingo (those pink fake ones) and faery folk lived.

I remember helping Grammie in the garden when I was a little girl. She patiently taught me how to dig the soil, add fertilizers--She showed me which plants loved the sun, which ones did not--where to plant them and how much water each needed. She told me stories about the flowers--how their lives were intertwined with our own. She was so wise. I never forgot those lessons--indeed, I passed them on to my own children.
Posted by Beth Niquette at 10:32 AM 7 comments: 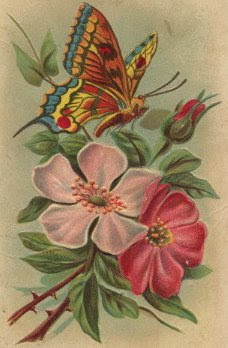 There is a part of me which constantly seeks beauty in life. This morning with its grey skies and tossings of yellow leaves amidst blowing rain, seemed to need a flower or two--and the butterfly made it perfect. 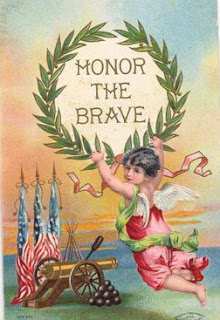 Today is Veteran's Day in America. A day when we honor all those dead and living for their sacrifice. I am moved to tears when I see the legend over the entrance to the Veteran's Hospital. "The Price of Freedom is Seen Here."

The lobby of the hospital is filled with brave men and women of all ages, from all walks of life. Some of these old soldiers had no choice in fighting--they were drafted and had to be brave. Others faced the enemy by choice. All are heros in my eyes.

Thank you Grandpa--you served in WW1. Thank you Daddy--you fought in the Battle of the bulge and were imprisoned in Stalag B and Bad Orb during WW2. Thank you Uncle Kelly--you went to war in Korea. Thank you Uncle Jody--you faced the enemy in Vietnam. Thank you Guy--you were at the frontlines of the first Iraq war. Thank you, young nephew David, you are protecting our country today.

Thank you to all the soldiers who fought and sacrificed their strength and youth and to all of you who continue to serve. YOU are my heros.
Posted by Beth Niquette at 10:09 AM 4 comments:

You Are My Sunshine 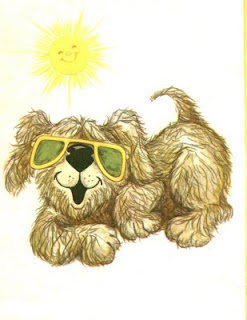 Way Back in the mid-1970's I received this delightfully funny card from my younger sister Clytie. It was entitled You Are My Sunshine. I loved it so much I kept it--and I'm glad I did.

The older I get, the more I realize sisters are wonderful gifts which fill one's life with beauty and sunshine.

Without sunshine one could not grow, smile or live. How grateful I am for sisters.
Posted by Beth Niquette at 11:50 AM 4 comments: 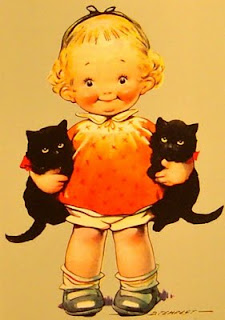 I love this postcard! It is a part of my cyber card and postcard collection. I love black cats. This little girl reminds me of the old Kewpie dolls.

When I was young I did a lot of house sitting for old Mrs. Hood. She lived in a wonderful old two story house, and was one of the first women to settle in our area back in the "olden times." Oh, the stories she would tell. She often gave my sister and I trinkets and odds and ends she thought we would like. 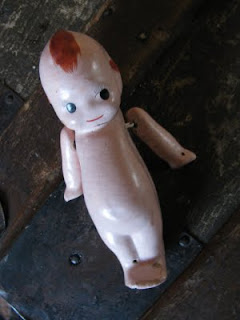 This is a Kewpie Doll she gave to me. This little hand painted doll is probably over 100 years old. She is made of a bisque-like material and her arms move. She is so old she has a crack down one side and a hairline fracture along the back of one arm.

The story I heard is the doll was bought from a peddler wagon which used to come through town. It is probably one of the very first Kewpie dolls ever made. I have never seen another like it in my research. 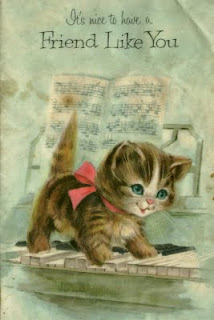 Here is another card from our Darling Grandma Jenny's collection. This beauty was from her dear friend Ruth.

There is a kind of music to friendship. A cadence, a lovely rich melody which resounds throughout life. The truth is, friendship puts color to the music of our lives.

Indeed--I am so blessed by YOUR friendship. You know who you are, my dears. You put the music into living.
Posted by Beth Niquette at 2:13 PM 4 comments: