Roses On His High-Heeled Shoes

We left our hero standing, keg on shoulder, beneath a pool of potent stares thrown his direction by group of odd little men.

Rip Van Winkle was filled with fear and apprehension, but he could not help but to gape back at them. "Their visages, too, were peculiar: one had a large head, broad face, and small piggish eyes: the face of another was surmounted by a white sugar-loaf hat, set off with a little red cock's tail. They all had beards of various shapes and colors."

A stout old gentleman with a weather beaten countenance, wearing high-heeled shoes festooned with roses, seemed to be their leader. 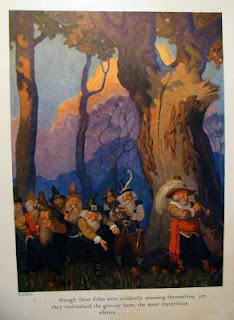 The leader motioned Rip Van Winkle to lower the keg of liquor he bore. His companion then emptied the contents of the keg into several large stone flagons which occupied a nearby oaken table. Then he made signs to Rip Van Winkle to wait upon the motley company. He, though frightened beyond belief, obeyed with fear and trembling. The old men quaffed the liquor in profound silence, then returned to their game of nine-pins.

As Rip Van Winkle watched, he noticed their faces were grave. The sombre stillness in which they played seemed mysterious. And he noted that, as they continued in their game, the little men were "were, withal, the most melancholy part of pleasure," that Rip Van Winkle had ever witnessed. 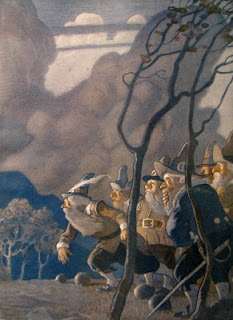 "Only the noise of the balls, when they were rolled, echoed against the mountains like rumbling peals of thunder." 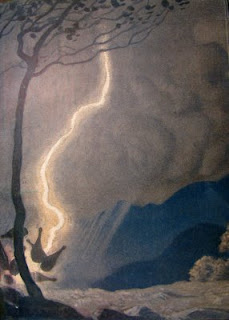 As he watched them a certain peace seemed to steal over his soul. By degrees his fear, awe and profound apprehension subsided. He even, when the old men were thus occupied, ventured to taste the beverage, which he then determined was much to his liking.

Being a thirsty soul, Rip Van Winkle was soon tempted to take another drought. "One taste provoked another; and he reiterated his visits to the flagon so often, that at length his senses were overpowered, his eyes swam in his head, his head gradually declined and he fell into a deep sleep."

And there I shall leave you, dear readers, until next time!
Posted by Beth Niquette at 8:11 AM

Those illustrations are amazing! I enlarged them so I could see them better.

Sissy, I'm so glad that this precious book is in your hands, I know you'll take good care of it. Thank you, thank you for sharing.

Hello
Thank you for sharing.Oh I truly love the art work.
I must go and find my book so I can pass it on.
I have not thought of this in years.
I always have sweet moments when I come by to visit your blog.
Thank you for bringing out the good in me :)
Have a fantastic rest of the week.

One taste of this story provokes another too! I just woke up and rannnn to my computer to read your next installment:) The ilustrations are dreamy and it's so nice to know that this story is coming from your book and heart:)

I have been thinking (I do ocassionally) your lovely comments(thank you) at my place are always so Poetic,how about turning your hand at writing some Poems?
Love the illustrations here, especially that last one.Beautiful.