Back to our Story.

Poor Rip Van Winkle has awakened to find the entire town changed. All his friends have moved, or are gone. Finding his way to his house, expecting any minute to hear the shrill scolding voice of Dame Van winkle, he was greeted with silence. His neat and tidy house seemed to be abandoned.

A half-starved dog who looked like Wolf, snarled when Rip called his name. This was an unkind cut indeed. "My very dog," sighed poor Rip, "has forgotten me." 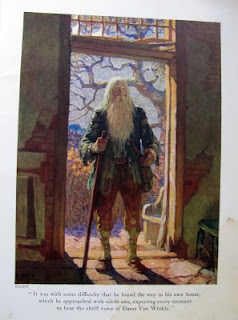 Sadly Rip Van Winkle made his way back into the town. His questions filled the townsfolk with curiosity and pity. "Rip's heart died away at hearing of the sad changes in his home and friends and finding himself thus alone in the world." Every answer puzzled him too. It seemed overnight an enormous amount of time had passed him by.

Finally he cried out in despair, "Does nobody here know Rip Van Winkle?" The townspeople whispered and muttered behind their hands, tapping their fingers against their foreheads, and casting wide their glances, broadcasted their doubt of his sanity.

At this critical moment a fresh comely young woman passed through the throng...she had a chubby child in her arms, which, frightened at his looks, began to cry. "Hush, Rip, cried she, "hush you little fool! the old man won't hurt you." 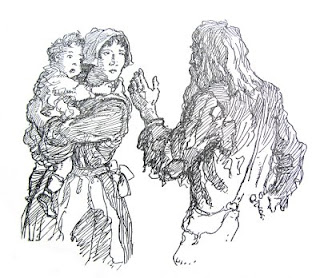 Trembling in his ragged boots, Rip Van Winkle asked, "what is your name, my good woman?"

"And your father's name."

"Ah, poor man! Rip Van winkle was his name, but it's twenty years since he went away from home with his gun, and never has been heard of since--his dog came home without him; but whether he shot himself, or was carried away by the Indians, nobody can tell. I was then but a little girl."
Stretching out a trembling gnarled hand, Rip asked, "Where is your mother?"

And there I leave you, gentle Readers, until next time, when the conclusion of the story, with it's rich and wonderful illustrations, shall be told.
Posted by Beth Niquette at 10:52 AM

I am thoroughly enjoying this. Thanks!

I too am enjoying this amazing tale and wonderfully illustrated piece. Don't keep us in suspense too long!!!

This is very moving. I never really knew anything but the general story. Thanks for posting it.