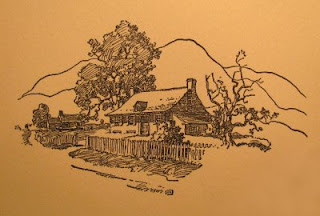 Rip Van Winkle had one more question to ask. With faltering voice he said, "Where is your Mother?"


"Oh, she, too, had died but a short time since; she broke a blood vessel in a fit of passion at a new England peddler." It is sad, but it must be said that to Rip Van Winkle, who's dread of his wife had grown with every step, this was a drop of comfort.


Then an old woman, tottering from out of the crowd, put her hand to her brow, and peering up into his pitiful wrinkled face for a few long moments, exclaimed, "For sure and for certain! This man IS Rip Van Winkle! Where have you been these long 20 years!


Then the townsfolk were astonished and all listened to the story of what had happened to him. Rip's daughter took him to live with her in her snug, well-furnished house. He resumed his old walks and habits; and found many of his old cronies, though they were somewhat worse for the wear and tear of time.


But mostly he preferred the company of the children of the village, with whom he soon grew into great favor. They loved his stories and whimsical nature, and would flock around him whenever he went out. 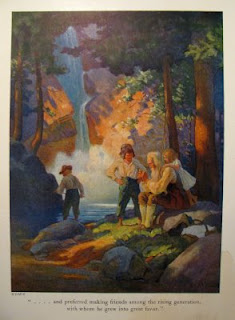 Peter Vanderdonk, a descendant of a great historian, and who was well-versed in all the wonderful events and traditions of the neighborhood assured all who asked, that Rip Van Winkle's story was indeed fact.


It had been handed down that the Catskill Mountains had always been haunted by strange beings. "It was affirmed that the great Hendrick Hudson, the first discoverer of the river and country, kept a kind of vigil there every twenty years, with his crew of the Half-moon, being permitted in this way to revisit the scenes of his enterprise and keep a guardian eye upon the great city called by his name."


That ancient historian had himself "once seen them in their old Dutch dress playing at nine-pins in a hollow of the mountain; and that he himself had heard, one summer afternoon the sound of their balls, like distant peals of thunder."


So, Gentle Reader, here ends the strange story of Rip Van Winkle!
Posted by Beth Niquette at 5:34 AM

Awe, why does it have to be OVER???? Sniff, sniff, snort, whine ....... Thank you so much for sharing this beautiful story and illustrations. It's been fun!

I'm checking in and see that I've missed so much! I'm going to sit down to read the story with a glass of wine tonight!

Great story to soon to be over. Thank you again for sharing. Have a Happy Day.

Soooo.. the Mrs. was a bit of a naggy haggy, eh? This gave him a drop of comfort..ha! It's amazing to know that this could indeed be fact! Who knows! Wonderful wonderful story Beth!