The Appearance of a Peculiar Stranger 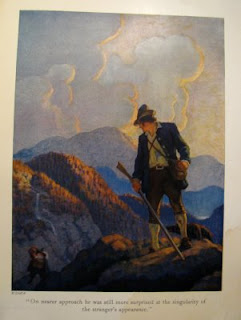 These paintings just fill my eyes with their richness of color, composition and movement. And the story is fascinating!
.
In the last installment we left our Hero, Rip Van Winkle and his dog Wolf at the spine of a mountain top--when someone called out his name.

Wolf growled and his hair stood up straight upon his back. Rip Van Winkle felt a vague apprehension--after all, who up here would know his name? He turned to see a strange figure toiling up the rocks, bent beneath a heavy burden. Rip Van Winkle was surprised to see another human being in that isolated area--and believing it to be one of his neighbors, he hastened to see if he could give some assistance.

But the man was like no one he'd seen before. "He was a short, square-built old fellow, with thick bushy hair and a grizzled beard. His dress was of the antique dutch fashion--a cloth jerkin strapped around the waist--several pairs of breeches, the outer one of ample volume, decorated with rows of buttons down the sides and bunches at the knees."

What the little man carried over his shoulder with such difficulty, was a keg filled with some kind of liquor. (grin) Then the small man gestured for Rip Van Winkle to approach and assist him. Being a helpful individual, he did not refuse.

As the two traversed a dry rocky stream bed, long rolling peals, like distant thunder seemed to burst forth from between the high rocks which seemed to be their destination. Passing through a cleft in the cliffs, they came upon an amphitheatre where a company of odd-looking old men played at nine pins. As Rip Van Winkle and his silent companion drew closer, they suddenly desisted from their play, and stared at him with such "fixed statue-like gaze, and such strange, uncouth, lack-lustre countenances, that his heart turned within him, and his knees smote together."

And there I shall leave you. (grin) Egad! Wonder what will happen next???
Posted by Beth Niquette at 8:21 AM

Eeeek! I want more..more..more! What a cliffhanger... I guess I've learned that you shouldn't trust multiple breech wearing men who carry around whole kegs of booze!

I know that you're not even awake yet because of the time zones! Look how addicted I am:)

I'm with Marie Reed here - cliffhangers kill me! Hmmmm must have been a very strong man to be carrying around a booze-filled "keg"!

I'm on the edge of my seat!