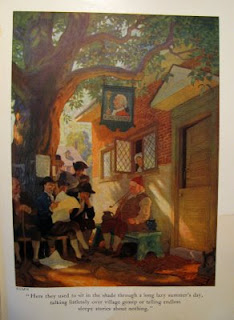 Times grew worse for poor Rip Van Winkle. For a long while he consoled himself by frequenting the town Pub, which was populated by a group of grizzled old men--wise in their own eyes. A frothy pint of brew, and an old newspaper brought about profound discussion. In those days, there were no daily newspapers. Often such news would arrive days after certain events. This did not keep the old sages from commenting profusely.

But this blissful stronghold was often breached when Rip Van Winkle's termagant wife would suddenly break in upon the tranquillity of that group of philosophers, to punish them all with her tongue.

Poor Rip Van Winkle was reduced to despair. To escape from his wife and duties on the farm, he would take gun in hand and stroll into the woods. Here he and his dog Wolf found peace.

On one such long ramble, Rip Van Winkle inadvertently wandered into the highest parts of the Catskill mountains. He was hunting squirrel that day. At the top of a mountainous ridge, he rested, looking across the vast sea of tree-clad mountains. As he sat savoring the quiet air, leaning comfortably against a great pine tree, the night gradually advanced.

He thought about going home, but "heaved a sigh when he thought of encountering the terrors of Dame Van Winkle." He reluctantly stood and was about to descend the mountain, when he thought he heard a voice calling his name. It seemed to come from some distance away. Rather than face his wife's turgid tongue, Rip Van Winkle turned toward the voice...

The rest of the story will continue with the next entry! (grin) Isn't this a GREAT story?
Posted by Beth Niquette at 6:28 AM

Great story, great illustration! Can't wait for the next installment!

It's a wonderful story and I love that illustration too!

Hello Beth Niquette
Really enjoying reading your posts.I love the pub illustration. The ray of light makes it look very atmospheric. I can see why you like this book!
Take care
Isabelle x

that is a beautiful illustration... I love the light. I look forward to the next chapter!

From the Old InkWell said...

I came across your blog today via Cpaphil Vintage Postcards. I'm so glad I did. All your delightful vintage cards are just dreamy.

Thanks for a smile.

Hi Beth! My darling kitty cat has tagged you on my blog. If you'd like to play, you can visit me and get the details!