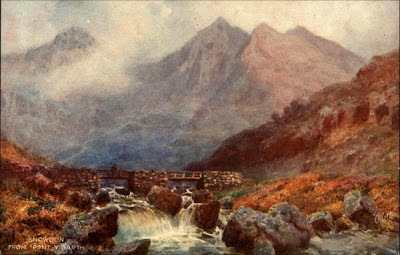 This postcard is of Snowden, the highest mountain in Wales.  It is the closest thing I have on hand  for Wales!  I'm posting an extra entry today, as it was brought to my attention that today is Saint David’s Day!

My research into the life of this man is fascinating.  Saint David was born towards the end of the Fifth century. He was of the royal house of Ceredigion and as a young man, founded a Celtic monastic in Wales.  During that time, his fame as a teacher spread throughout the Celtic world.


Saint David is said to have died on March 1st sometime around 588 AD.  On his death bed, Saint David said to his fellow monks, "Brothers be ye constant. The yoke which with single mind ye have taken, bear ye to the end; and whatsoever ye have seen with me and heard, keep and fulfill."

The feast day of Saint David, patron saint of Wales, falls on March 1st each year. This date was chosen in remembrance of his death.  Saint David was recognized as the national patron saint of the Welsh people at the height of their resistance to the Normans.  March 1st was declared a national day of celebration within Wales in the 18th century.

A relatively recent update is the National Assembly for Wales voted unanimously to make Saint David's Day a public holiday in 2000!  Forgive this American Citizen's enthusiasm, but, "Yehaw!"

Happy St David's Day to you too! It's a lovely, lovely card.