Legend of St. Patrick and the Pig -Postcard Friendship Friday #158 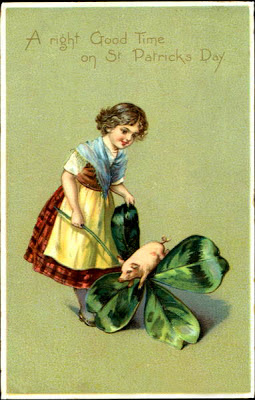 I have always wondered why pigs are so often included in St. Patrick's Day cards, along with shamrocks Leprechauns and pipes.  I finally discovered the legend!  Here's the story:

St. Patrick was born along the west coast of Roman Britain where his parents raised the boy as a Christian. Sadly, when Patrick was a teenager, a group of Irish raiders attacked his family's estate while his parents were out of town.  So 16-year old Patrick, along with many of his family's servants, was taken hostage and forced to live in Ireland as a slave.

The land of Ireland was wild, harsh and rugged.  Life there was extremely difficult.  St. Patrick was sold and  legend has it that his master was a kind man.  St. Patrick served him faithfully for six years.

However, when he was in his early 20's, St. Patrick experienced a profound spiritual transformation. After a prolonged fast he fell into a deep sleep.  In a dream, he heard a voice saying, “Thou doest well to fast; thou shalt soon return to thy native land.”

From then on, St. Patrick began planning his escape.  The day came when he traveled safely across the country to the east coast town of Wicklow, where trading vessels were about to set sail. He approached one and was taken aboard as a crewman.

After sailing for three days, the ship landed along the shore of an unnamed country. Scholars believe the boat landed along the southwest coast of Gaul, perhaps at what is now known as Bordeaux.  After making their way on foot through a “desert” for nearly a month, the group ran out of food.

The leader, who knew of St. Patrick's devout belief in God addressed him, saying, "What have you to say for yourself, Christian? You boast your God is all-powerful. So why can’t you pray for us, you know how badly hunger threatens us; its beginning to look as if we may not survive to see another living soul."

With great confidence St. Patrick replied, "Turn trustingly to the Lord who is my God and put your faith in him with all your heart, because nothing is impossible to him. On this same day, he will send us food sufficient for our journey, because for him there is abundance everywhere."

As the story goes, those words no sooner left St. Patrick's mouth, when a huge herd of wild pigs miraculously appeared, blocking their way.  Wasting no time, the crew dispatched enough of the animals to last for days.

According to legend, the group finished their journey through Gaul, then headed into Italy.  From there, St. Patrick traveled alone to his home, where he was joyfully received.

So, there you have it!  Now you know why pigs are included in St. Patrick's Day cards!  Have a lovely day and Happy Postcard Friendship Friday!

*  DON'T FORGET:  When you submit a postcard, be sure to put a link back to this page.  You can copy and paste the PFF badge, which has the link embedded.  Thank you!

* FRIDAYS:  You can link up any time during the week--even if it isn't Friday.  The linky is open for an entire week!*  NOTE: You don't have to stick to the theme I choose each Friday. Just put up the postcards you love and tell us why you like them.

Posted by Beth Niquette at 6:00 AM

Well that's a new one for me - I hadn't heard of pigs being associated with St Patrick before. :)

Yep, it's a new one for me too! I guess I've never looked up the legend before!!!

How interesting!!!
Thanks!
I always enjoy your blog!

I am obviously not very observant of St Patrick - I hadn't known about the pigs!

What a great story, love your card.

I've never heard this story before but I thoroughly enjoyed it. Have a great week, raining here this morning, in fact it's been raining all night, not a heavy rain, but still rain. LOL Glad it's not that heavy snow that would have to be removed to get the car in or out of the driveway.