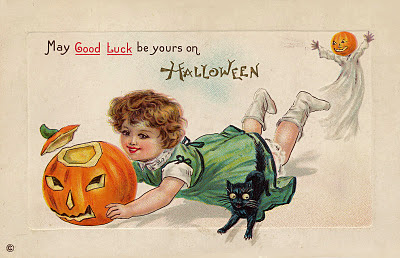 In parts of the north of England, Halloween was known as Nut-crack Night.  Nuts were put on the fire and, according to their behavior in the flames, forecast faithfulness in sweethearts and the success, or failure of marriages.

In Lancashire, England 'Lating' or 'Lighting the witches' was an important Halloween custom. People would carry candles from eleven to midnight.  If the candles burned steadily the carriers were safe for the season, but if the witches blew them out, the omen was bad indeed.

Halloween was also sometimes called Snap Apple Night. The original game of Snap Apple was played with apples suspended on a long piece of string.  Players had to try an bite the apple without using their hands. Another way to play the game was to fix an apple and a lighted candle at opposite ends of a stick suspended horizontally and to swing the stick round.  The object was to catch the apple between the teeth whilst avoiding the candle.   Bobbing for Apples in a vat of water is a much safer variation of this game!

Many places in England combined Halloween with Mischief Night when boys played all kinds of practical jokes on their neighbors.  They changed shop signs, took gates off their hinges, whitewashed doors, and tied door latches.  Things which, if done today, might land them in the jailhouse!

Great postcard and an interesting history lesson, which I feel that coming from the UK I should have already known. I'm not theming this week as Halloween postcards seem few and far between in the UK, but hopefully my selection for this week will be of interest. Happy PFF !!

what a wonderful postcard and you are always so informative

We used to bob for apples in Ireland when I was growing up, also trying to catch them when the were suspended on strings. I do remember asking my grandmother why we didn't have Bonfire Night instead.

Wonderful card and I love the information you come up with. NutCrack Night ... who knew? And the candles ... don't blow them out! I remember bobbing for apples when I was very young (a very looooong time ago)!!Happy PFF!

I have a problem posting from this google account since yesterday but now that I have change the codes hope it will run.

Well, I must say I had a crush for this lovely card. I didn't knew England had such a relation with Haloween.

I like the card! I too had no idea of some of these early traditions of Halloween. I like the snap apple idea - I've seen the apple on a string game before, as well as bobbing for apples. Not the candle one though thank goodness.

I love all these Halloween stories. They are all new to me. Thanks. Love the card.