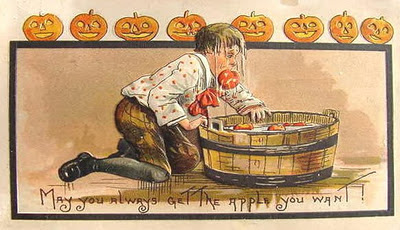 I adore this picture--reminds me of harvest parties of the past, where bobbing apples was a part of the fun festivities--though this young man doesn't seem to happy, does he?

Bobbing for Apples is played by filling a tub with water and putting apples in the water.  The apples bob on the surface of the water.  The first to grab an apple in one's teeth wins.  Since a person isn't allowed to use anything but their teeth, catching an apple floating in water, isn't as easy as it may sound!  I say that from personal experience.  Since players aren't allowed to use their hands, it's all in the "dooking" as they say in Scotland.

In ancient times, the first "single" person to capture an apple in their teeth is said to have the blessing of becoming the first to be married in the group.   In Ireland, this game is known as "Snap Apple."  In other places Snapp Apple Night is another name for Halloween.

Recycle, the possibilities of seeing new vistas from old viewpoints are endless!

My mom would never let us bob for apples. But I love the postcard.