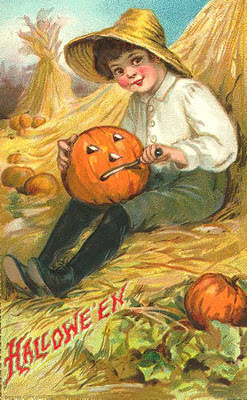 Traditionally glowing jack-o-lanterns, carved from turnips or gourds, are set on porches and in windows, to welcome Trick or Treaters as they canvas neighborhoods for goodies.

In ancient times, it was thought the lighted pumpkin faces acted as protection against evil spirits. Burning lumps of coal were used inside as a source of light, later to be replaced by candles.

Pumpkins are only found in the western hemisphere so they were completely unknown in Europe before the time of   In 1584, the French explorer Jacques Cartier reported from the St. Lawrence region that he had found "gros melons", which was translated into English as "ponpions," or pumpkins.  In fact, pumpkins have been grown in for over 5,000 years. Native Americans called pumpkins "isquotersquash."

Did you know pumpkins are not a vegetable - they are a fruit! Pumpkins, like gourds and other varieties of squash are all members of the Cucurbitacae family (just try to pronounce that), which also includes cucumbers, gherkins, and melons.

*  Don't forget to visit Gemma at for Weekend Mailbox.

What a fascinating history of the pumpkin/jack-o-lantern! And the card is absolutely adorable! I am amazed at your Halloween postcard collection! I have ... just one. Sigh.

They are such a rich and beautiful colour, I wish we saw more of pumpkins. they were unheard of when I was a child.

Hi Beth
Thanks for your visit and your comment - I'll have to have a nice look around your blogs!
If you would like to purchase one of the Mennonite Girls Can Cook cookbooks they are readily available in the USA at this link
http://mgccpurchase.blogspot.com/
Good luck!

thanks for the lesson on pumpkins! I had no idea they'd been here all those many years. sweet card I wonder when the apostrophe was dropped in our spelling of All Hallow's Eve or Halloween.

That reminds me...we need to carve our jack-o-lantern this weekend! Happy PFF!

Hi, Beth! Cool pumpkin-slashing card...I learned Latin in high school (yes, in Transylvania, Romania!) so that family name is spelled differently: "The plant family Cucurbitaceae". http://en.wikipedia.org/wiki/Cucurbitaceae
American pronunciation of Latin language (Classical?)is different than in Romania ("Vulgar Latin" = everyday, popular Latin). For pronouncing, I think the American version is (read this as in Spanish)Cucurbita-ke-e.
The European version is (read this as in Spanish)Cucurbita-che-e.

Thanks to your cards and all the infos you are giving, I'll be just unbeatable talking about it here.

I love this postcard. I don't have any Halloween-theme in my collection. We have an Asian version of pumpkins and we call them squash. Very rich in Vitamins A and C.