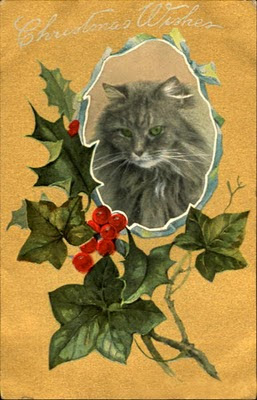 I especially love this vintage postcard because this sweet Holly Tree Kitty is the spitting image of my good old buddy Sir Brat T. Bone.  He lived with us for nearly 17 years before he flew away to Cat Heaven.  I still miss him.

Though there are many ancient traditions concerning holly trees, early in the first century holly leaves came to symbolize the crown of thorns pressed into the Lord's brow, as He suffered at the hands of Roman soldiers.  The red berries were said to symbolize His blood.

In Britain, during the time of Oliver Cromwell, Christmas was actually banned by the Puritans!   But Christmas-loving country folk thwarted this ban by tying up rough bunches of  holly boughs with evergreens during the holiday, as a symbol of Christmas.  An ancient "Neener, neener," I think!  Tch tch tch, those naughty country Folk!  This became a tradition which has become the holly bough we know today.

Such a pretty kitty!

this is a gem! love the green eyes on this kitty! Merry Xmas!

As usual, a BIG thank you for being the hostess with the mostest on Postcard Friendly Friday. Oh, and I just let our cat back in from outdoors where he would rather be than in here with me. We don't have our tree (or mistletoe) up yet, so he's left with nothing to play with.

Beautiful cat and card. "The Holly and the Ivy" is probably one of my favourite - and now you've started me singing it to myself....

I made a whole video with mt cat Christmas postcards this week. I think they all have holly too.

Thank you beth for hosting every week.

Lovely card, there seem to be so many fantastic vintage Christmas postcards being shared. I have diverged slightly but still kept the wintery theme. Happy PFF.

Keeping a look out for wassailers and mince pies, or perhaps drop the n for mice pies.

Just want you to know how I enjoy finding and posting a card each week on PFF. Glad I stumpled onto your blog. Even though I don't actually collect postcards, I found I do have quite a few and there are so many great ones out there! Thank you for being a gracious hostess and Merry Christmas!! Carol