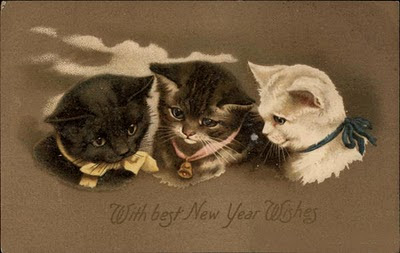 I thought these three little kittens would be a dandy way to start off a fabulously "Crunchy" New Year!
The celebration of the new year is the oldest of all holidays. It was first observed in ancient Babylon around 4000 years ago. In 2000 BC, the Babylonian New Year began with the first New Moon after the Vernal Equinox (first day of spring).  The beginning of spring is a logical time to start a new year. After all, it is the season of rebirth, of planting new crops, and of blossoming.

The Babylonian new year celebration lasted for eleven days. Each day had its own particular mode of celebration, but it is safe to say that modern New Year's Eve festivities pale in comparison.

The Romans continued to observe the new year in late March, but their calendar was continually tampered with by various emperors so that the calendar soon became out of synchronization with the sun.

In order to set the calendar right, the Roman senate, in 153 BC, declared January 1 to be the beginning of the new year. However the royal calendar tampering continued until Julius Caesar, in 46 BC, established what has come to be known as the Julian Calendar. This again established January 1 as the new year. But in order to synchronize the calendar with the sun, Caesar had to let the previous year drag on for 445 days.

Imagine that!  Happy New Year Everyone!

Howdy Beth
Happy New Year to you :)
Thank you for hosting a wonderful Postcard Friendship Friday .
I never realized there were so many changes to the calendar.
Have a blessed and beautiful PFF !
The kittens are adorable like you .
Until next time
Happy Trails

Thank you Beth for all the work you do on Postcard Friendship Friday. I look forward to it every week.

Happy New Year, hope 2011 is a very healthy New Year for you and your family and dear friends.

A big THANK YOU and a virtual hug for hosting Postcard Friendly Friday, and hope it continues to be an every Friday occurrence well into the New Year. No kittens, but I got pigs and bears this week!

A wonderful, happy New Year to you!

Happy New Year! Pretty kittens for PFF! I personally would prefer a calendar that gives us 3 day weekends.

fascinating stuff that i once knew and had forgotten ;-)

thanks for being our hostess with the mostess...all the best for 2011!

Happy New Year, Beth! May the coming months fill your heart with untold happiness and may each day shine luminously bright! Hugs, P. :))

Hi,I just came across your blog and I really find it wonderful.