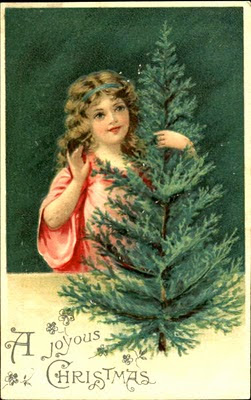 My family comes from Austria and Germany, so it was fun to learn some of our Christmas traditions began there.  In the 1700's the tops of evergreen trees were cut and then hung from the ceilings.  These first Christmas trees were decorated with apples, gilded nuts, candies and red paper strips.  Because of these edible ornaments, they were often called sugar trees!

Though the French believe they were the first to put candles on Christmas trees, others attribute the tradition to the Germans.  Christmas trees themselves, were then introduced to the United States by German settlers.  The first glass ornaments also came from Germany.  By the mid-1800’s Christmas trees were harvested at random from America's forests and sold commercially.

In 1853 Franklin Pierce brought the first Christmas Tree to the White House.  In the early 1900’s due to over harvesting, the natural supply of evergreen trees was nearly decimated. Conservationists became alarmed and many magazines began to encourage people to substitute an artificial “snow” covered tree, consisting of a branch of a deciduous tree wrapped in cotton.  I wish there were pictures of these--anyone out there know of any?  Let me know, I'd love to see one!

The first Christmas Tree farm was started in 1901 when W.V. McGalliard planted 25,000 Norway spruce on his farm in New Jersey. This was around the time President Theodore Roosevelt decided to ban the tradition of Christmas Trees out of concern for the destruction of  forests. His two sons didn’t agree and enlisted the help of conservationist Gifford Pinchot to persuade the president that, done properly, the practice was not harmful to the forests.  Thirty years later President Franklin Roosevelt started a Christmas Tree farm on his estate in Hyde Park, New York.

In 1966, the United States National Christmas Tree Association began the tradition of having the Grand Champion Christmas tree grower present a tree to the First Lady for display in the Blue Room of the White House.

Posted by Beth Niquette at 2:07 PM

How wonderful! I love this Christmas tree history---thanks so much for sharing it! I never knew about the artificial snow covered trees---would love to see pictures of those, too!

Hope you're having a beautiful day!

Gorgeous postcard! Beautiful tree, even without all those decorations. Austria and Germany? In USA, everybody is from somewhere else, one or more generations ago. Including the Amerindians. Except MAYBE the likes of The Kennewick Man. Geneticians said that all modern mankind was genetically traced to 4 different primitive females from Africa. What about BEFORE them, huh? Huh? :)

The green color on the card really gets me in the Christmas spirit.

I remember German lessons at school when we had to sing "O Tannenbaum" at Christmas. The Royal Family is credited with bringing the custom to Britain.

And many of those trees are now grown and shipped from Oregon.

What a gorgeous postcard. I'd love to have one like that!

Gorgeous undivided back postcard! I love the stamp cancellation in the form of a flag on the reverse too! Happy PFF!

Another great alternative history lesson, and a sweet card. Beth, thanks for hosting PFF and enjoy your Christmas preparations.

Thanks for hosting PFF, Beth. I truly enjoy visiting here for the cards as well as the history lessons!