The Luck of the Irish - Postcard Friendship Friday #2 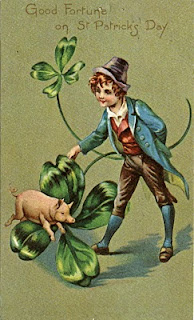 The name Leprechaun is derived from the Irish word leipreachán, which means "a pigmy, a sprite, or Leprechaun".

The earliest known reference to the leprechaun was in a fairytale from the Middle Ages titled The Adventure of Fergus son of Léti. The story begins with the good King of Ulster who falls asleep on the beach, only to awaken to find himself being dragged into the sea by three lúchorpáin. He captures his abductors, who grant him three wishes in exchange for release.

The leprechaun is said to be a solitary creature, about three feet tall. He makes and mends shoes and loves a good practical joke.

In ancient times it was said the leprechaun wore red, not green. The leprechaun's jacket was rather distinctive, with seven rows of buttons, seven buttons to each row. He wore a cocked hat, and when he was up to anything unusually mischievous, he would leap on to a wall and spin, balancing himself on the point of his hat with his heels in the air. The Leprechaun is rumored to live at the end of the rainbow, guarding his pot of gold.

Marie gave me permission to let you all know that she will not be doing PFF anymore. Due to a condition she was born with, she's losing her eyesight. This brave lady has two young children and is learning Braille. I am honored and privileged that she has asked me to permanently host PFF . I will do my very best to fill this wonderful woman's shoes.

Posted by Beth Niquette at 6:06 AM

And by the luck of the Irish, I am the first to comment! A lovely piece of nostalgia.

Wonderful card. We need a festive holiday this time of year!

I have followed Marie's blog since I started my blog last summer and love all the beautiful postcards and vintage images.

I thought I would link up this time with a Hawaiian postcard and post.

Thank you for hosting.

Thank you for hosting Beth. Will you be our new hostess, or is this temporary?

They obviously live amongst giant shamrocks as well. Wishing you good fortune on St Patrick's day as well, lovely card.

Oh, I am so sorry to hear that Marie is losing her eyesight. She did such a great job with this, as I'm sure you will too.

So sorry to hear about Marie, we appreciated all her hard work. Thank you so much for hosting, I'm excited to see your postcards too!!

am so saddened to hear about marie...thank you for offering to fill her very big shoes at PFF.

Thank you for being our host! And for stopping by this morning! Love3 all your info about the Leprechaun. I know they fix shoes, but do they do windows? Happy PFF!

Thanks for taking this up! My best to Marie.
I didnt find the McLinky to add to...sometimes I am just challenged. Here is my post for Postcard Friday:

Nice of you to take over hosting. I didn't have a St. Patrick's day card so I just picked one I liked.

Thank You for hosting our meme. I'm sorry to hear about Marie. I would love to keep in touch also. Love your St. Patrick's Day post. Happy PFF

Sorry but I accidently posted my Post Card Friday link twice, not sure how that happened but if you could be so kind as to delete the first post.
God Bless

Thank you for hosting PFF, Beth. You posted a wonderful card. I am shocked to read about Marie's condition, and I am deeply sorry for our sweet French factrice and her family. We'll miss her posts.

I'm so very, very, sorry to hear the news about Marie. Please, if you can, send her all my very best wishes.