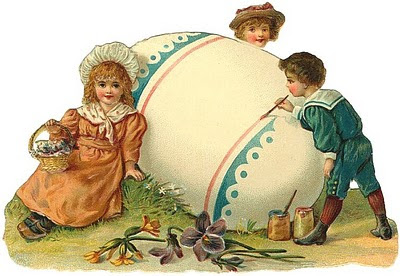 There is a charming legend about coloring Easter Eggs. The story begins with Mary Magdalene. She was bringing cooked eggs to share with the other women at the tomb of Jesus. It is said the eggs in her basket miraculously turned brilliant red when she saw Jesus had risen from the dead.

Another version of the story has Mary visiting the Emperor of Rome to tell him the good news.

She greeted him with “Christ has risen,” whereupon the Emperor pointed to an egg on his table and replied, “Christ has no more risen than that egg is red.” As soon as he said this, the egg is said to have turned a lustrous red color.


Easter eggs are decorated in many ways. Some of these eggs are beyond beautiful. There is a process called the batik (wax resist) which is used to create intricate, brilliantly-colored eggs, the best-known of which is the Ukrainian pysanka. Then we have all have heard of Fabrege' eggs, which were exquisitely jewelled Easter eggs made for the Russian Imperial Court. Most of these creations had delicately hinged doors which opened to reveal hidden surprises such as clock-work birds, or miniature ships.

Posted by Beth Niquette at 6:57 AM

So THAT's where the red egg traditions come from! My husband's family, of Romanian descent, color eggs red. On Easter, one person hits an egg against another's. One egg will crack and one will remain unbroken. Good luck follows the person with the unbroken egg. Kind of like the wishbone tradition. As they hit the eggs together one person says "Christ has risen!" The other person replies "And He will rise again!" Nice post, Beth!

Love the legends...think I'll do all my eggs this year red. Will be an opportunity to share this stories when people ask, Why all red?
And I've seen the intricate wax batik ones, incredible.
Thanks for sharing a wonderful post today ;-)

I had never heard those legends. Very interesting!

I never heard those stories about red eggs before.

I have Hungarian Easter eggs on my blog today.

wow! i had absolutely NO idea of the history...a gorgeous card and an informative post! perfect for PFF!

Sure, great history, but who's in the egg on your card? Super Chicken? :P

Hi Beth-
Hope you are well! Thanks for the history lesson and love the image:)

A lovely card and interesting story. We will be rolling our eggs down hill soon, in a variety of colours, but which ones will survive.

Never heard this legend before. Nice

Wonderful vintage images on this postcard. ...especially the little girl.
And I enjoyed reading about the information you shared with this postcard.

I adore this card, so charming!

I'm so sorry for having missed PFF on the right day. I've finally caught up and I'll do my best to visit everyone before the next Friday arrives.

I must apologize too, Beth. I had my PFF up but forgot to come back and sign Mr. Linky... I'll get this right next week :)