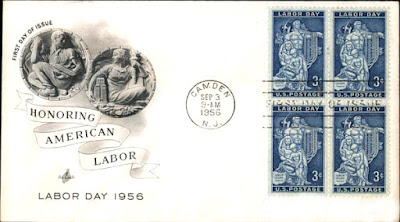 It was hard to find old postcards honoring Labor Day, which was a surprise considering Labor Day has been around since the late 1880's.  I finally found this one via an online source.  I hope you enjoy the beautiful 1956 postcard I was able to procure for you!

Labor Day falls on the first Monday of  September.  This holiday honors those who work with a day off to celebrate.  Labor Day weekend is also considered the end of summer, then its back to school for most of America’s kids. It is also a federal holiday, so most national, state, and local government offices are closed.

I did some research on the history of Labor day and even after more than 130 years after the first Labor day was observed in 1882, there still seems to be a controversy over who invented the idea first.  Was it the Carpenters, or the Machinists?

According to some historians, America’s carpenters and construction workers believe it was Peter J. McGuire, general secretary of the Brotherhood of Carpenters and Joiners and a co-founder of the American Federation of Labor, who first suggested a day to honor those “who from rude nature have delved and carved all the grandeur we behold.”

But there are others who argue that Matthew Maguire, a machinist from Paterson, New Jersey, was the man who proposed Labor Day in 1882 while serving as secretary of New York’s Central Labor Union.

The first Labor day was holiday was celebrated on Tuesday, September 5, 1882, in New York City, in accordance with the plans of the Central Labor Union. The day was highlighted by a parade to show the public “the strength and esprit de corps of the trade and labor organizations.”

Since it's celebrated with a day off--Labor Day became very popular very fast and by 1885, several city governments adopted ordinances calling for the observance of Labor Day.  June 28, 1894, Congress passed an act making the first Monday in September of each year a legal holiday.

“The vital force of labor added materially to the highest standard of living and the greatest production the world has ever known and has brought us closer to the realization of our traditional ideals of economic and political democracy,” notes the U.S Labor Department. “It is appropriate, therefore, that the nation pay tribute on Labor Day to the creator of so much of the nation's strength, freedom, and leadership— the American worker.”

Though there are plenty of folks who work through that holiday, ensuring our safety and well-being, most Americans will be taking a day off this coming Monday.  God bless you, dear ones.  Happy Postcard Friendship Friday!