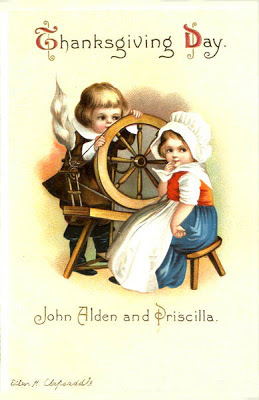 John and Priscilla were among the original settlers of the Plymouth Colony.  John was not one of the pilgrims, he was actually a handyman who'd been hired to repair the Mayflower.  He decided to join the pilgrims to make his fortune.  But there is a delightful rumor that the real reason he traveled to the New World was because of a young woman named Priscilla.

He had to work hard to win her, too.  John was not the only man who would fall for Priscilla. His friend, military Captain Miles Standish also fell in love with the maiden over the long voyage.  Both men vied for her affections, with John ultimately winning Priscilla's hand in marriage.  They were married on May 12, 1622.

I love that story--I am in good company.  Henry Wadsworth Longfellow wrote about their romance in his poem The Courtship of Miles Standish.

Daddy Update:  Thank you for your warm thoughts and prayers.  Dad is such a fighter.  He can now lift his bad arm up over his head and squeezed my hand with his fingers.  Sissy says the Doctor was shocked!  lol  More good news--Dad was having such a hard time swallowing and breathing--turns out there was some kind of obstruction in the back of his throat.  Yesterday afternoon the head nurse removed it, and now he can breathe SO much better.  He also got down a few ice chips.  We are so encouraged.

*  DON'T FORGET:  When you submit a postcard, be sure to put a link back to this page.  You can copy and paste the PFF badge, which has the link embedded.  Thank you!

*  REMINDER: Comments and links which contain advertising and do not refer to any of the following; Postcard Friendship Friday, mailboxes, the Post office, postcards or the love of postcards, will be deleted.  Lately, I've had to delete quite a few comments which are just ads.

Posted by Beth Niquette at 4:01 AM

I am gladdened to hear of your father's improvement! very encouraging.

I love the romance of this story - and I'm so glad Dad is doing a little better.

You and your family are in my thoughts and prayers Beth.

Good news about your Father. Wonderful Thanksgiving postcard. I love romance! :D :D Light and love to you and yours. Thank you for hosting and Happy PFF!

I'm so happy to hear how well your father is doing. Very best wishes to you all.