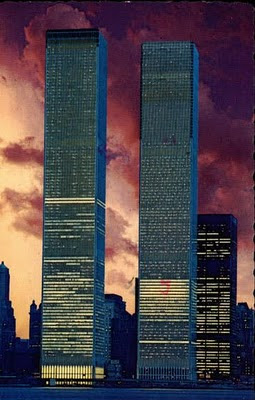 Sunday is the ten year anniversary of September 11.  That date was a defining moment in the history of the United States. And in the lives of myself and my family.

I remember that spring, just days before  the last bodies of those who had died were discovered, and the recovery effort was declared finished, my family and I had the opportunity to visit Ground Zero.  That great scar in the earth had left another one in my heart.

I will never forget standing on the viewing platform that cold cloudy day.  Hundreds of people gathered there, were silent as they walked up the ramps and stood together.   The air was eerily quiet.  It was as though the bare wood on the ramp was covered with a thick layer of dust.  As you know New York City never rests--it is like the ceaseless roar of a great ocean.  But in that place, sound was somehow dampened.

My husband and son stood close, as my daughters and I closed our eyes and began to sing Amazing Grace in three-part harmony.  Some of the people in the crowd joined in.

Then as we sang the words, "bright shining as the sun..."  Something incredible happened.  There was a sudden instantaneous break in those cold, dark clouds--a brilliant beam of sunlight burst through, beaming down, sweeping over the huge American Flag, covering Ground Zero where so many lost their lives.  Then a gasp from the crowd as brightness was touching our faces, embracing the hundreds on the viewing platform with dazzling warmth.

As we finished the song, our little family wrapped our arms around each other, heads bowed and we wept. I don't know how long we stood  there, tears slipping down our faces--but when we lifted our heads, we were alone.  The hundreds of people standing with us had moved away so softly we hadn't realized they had gone.

Though each group was only allowed 15 minutes, the guards told us to stay as long as we wished.  And we did--praying for all the families who's loved ones had died there, for our nation and for the world.

That day touched me and my family in a way I cannot even put into words.  What a blessing it was to feel--literally--the warmth of God's grace.  Suffice it to say none of us will ever forget 9/11, or the people who died that day in the World Trade Center.

* NOTE: You don't have to stick to the theme I choose each Friday. Just put up the postcards you love and tell us why you like them.

REMINDER: Comments and links which contain advertising and do not refer to any of the following; Postcard Friendship Friday, mailboxes, the Post office, postcards or the love of postcards, will be deleted.

Posted by Beth Niquette at 7:53 AM

ooh looking at it makes me feel the loss of many families.

Great story to go with the postcard, Beth. None of us will ever forget.

A very moving post with postcard. I recall exactly what I was doing the very moment the events happened on that fateful day; it was 3pm here in the UK and I know that I and my colleagues simply were in a state of shock and felt such horror. I remember having the radio on in the car home making sure I caught the news and then watching Sky News all evening when I got home. Such a tragic event.

The sky on the card looks suitably ominous. Your visit sound so special.

A very heartfelt post. My prayers for all those who perished in the tragedy.

I don't suppose there is anyone who doesn't remember where they were as they watched the story unfold. Like Angler's Rest, we all stopped work to watch.

Such a tragic event. Our hearts go out to all who had their lives blighted by it!

This writing is so strong and vivid and I can feel the emotions on that place in that day. My bf is from New York and my sympathies & prayers are with the Americans in remembering this significant event in your book of history.

I never thought you would have this as our theme this weekend. I have prepared my post 4 days ago and I picked a postcard of the WTC for a remembrance thought of the 911.

My prayers are with those who have perished that day and for the surviving families and for the world as a whole.

love the twin towers postcard! We have a terrible anniversary tmw to commemorate.

Beth your story brought tears to my eyes, it was a horrible, horrible day, one never to be forgotten.

There is an award on my blog for you, if you copy the Your Blog Rocks Award from my blog you may post it to your blog. Thank you for the time and effort you take for making this such a wonderful blog. Marge

This is a beautiful story. I might join your Friday posts this week.