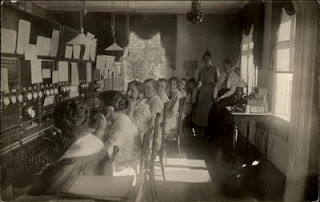 In January 1878, the Boston Telephone Dispatch company hired only boys as operators.  However, as the saying goes, "boy will be boys."  People began to complain when the youngsters showed their impatience with extremely rude behavior.  This included pranks and cursing.  As a result the company decided to hire women instead.

On September 1, 1878, Emma was hired as the very first women telephone operator in history.  She worked as a telephone operator for 37 years, retiring in 1915.  Everyone loved Emma's soothing, cultured voice.  Because of people's overwhelmingly positive response to her intelligence, gentle manner and great patience, those rambunctious boys were soon exclusively replaced by all women operators.

The rules to be a telephone operator were stringent.  A woman had to be unmarried, between the ages of seventeen and twenty-six. She had to look prim and proper and her arms had to be long enough to reach the top of the tall telephone switchboard! I was not able to discover how long a woman's arms had to be--the idea of a group of extremely long-armed women put a really funny picture in my mind...

At some point in her career, Emma was hired by Alexander Graham Bell who is credited with inventing the first practical telephone. She was paid a salary of $10 per month for a 54 hour week.  Incredibly she is said to be able to remember every number in the telephone directory of the New England Telephone Company.

Apparently Emma had a great sense of humor.  It was said she was always grateful her parents did not give her the name "Imma."  Can you imagine a telephone operator answering the line saying, "Hello, Imma Nut, may I help you?"

I wonder what Emma would think of today's wireless smart phones.  My own precious Grandfather, born in the late 1800's would rarely answer a telephone.  He could not understand how voices could be transmitted over wire and was quite skeptical of them.

Have a lovely day, everyone!

* NOTE: You don't have to stick to the theme I choose each Friday. Just put up the postcards you love and tell us why you like them! Have fun everyone! * Don't forget to visit Gemma at Greyscale Territory for Weekend Mailbox!REMINDER: Comments and links which contain advertising and do not refer to Postcard Friendship Friday, mailboxes, the Post office, postcards or the love of postcards, will be deleted.

Posted by Beth Niquette at 6:28 AM

Wonderful card - and a delightful history lesson as well!

We were just talking yesterday about 'party lines'. Do you remember those?
Ack!

Fascinating information Beth! I just love that picture too. I remember party lines Clytie! My grandparents had one and we got in a lot of trouble as kids trying to listen in on the other party's conversations.

what a wonderful shot! believe it or not it reminds me a little of the early 1970s in the UK when my father worked for what was in those days the GPO...on some special occasions like xmas day we would visit the women working on the exchange boards...how far we've come today! happy PFF!

It does make you wonder why they had to look prim and proper. Had they invented webcams before we realised? :) And unmarried? But that was the norm for all sorts of employment I suppose.

I'm going to try to hit a few sites today - off and on - because I haven't been - hitting any! As is usual, thanks for hosting PFF - I find it hard to stay away.

Yes - I remember party lines. I too had a Grandpa & Grandma that avoided the phone. They were bilingual - French being their first. My dad and mom had a party line as well, and they used to share a laugh over G&G.

Agnetha, the blonde from ABBA worked as a phone operator. Then she found a slightly better gig. :) Nostalgic card...

Reminds me of Lily Tomlin's "One RingyDingy" on Laughin:
http://www.youtube.com/watch?v=k9e3dTOJi0o

This is a fantastic postcard, and thanks for the historical insight. My mother used to work as a telephone operator in the 1950's in the Admiralty on Regent Street, London. Don't think her arms are particularly long though.

I love this card. Incredible.