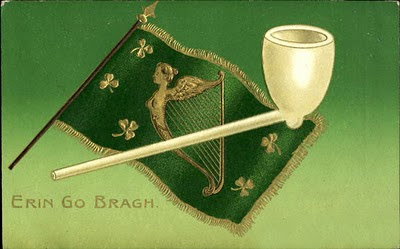 I have always wondered what Erin go braugh meant.  It is actually the phonetic pronunciation of "Éirinn go brách," which in Irish (Gaelic) means "Ireland Forever." The phrase was an Irish blessing used to express allegiance to Ireland. It could also be translated as "Ireland 'till doomsday," "Ireland until eternity," "Ireland until the end (of time)" or "Ireland until the Day of Judgment."
As I did my research for today's PFF, I became fascinated with the long history of Irish Pipes.  The first Irish pipes were made of clay and were called Dúidíns.  They were smoked by both men and women and they were an integral part of an Irish wake.

In an Irish Wake, when the deceased was prepared and laid out on a bed or table--often in the largest room of the house--the body was surrounded with lit candles, covered in white linen adorned with black or white ribbons and flowers. Clay pipes, tobacco and snuff were placed on a table nearby. Every male caller was expected to take at least one puff from a pipe. The smoke was believed to keep evil spirits from finding the soul of the person who died.  Occasionally, a pipe was laid on the chest of the deceased.


Some pipes in the olden days were also made of  Meerschaum and porcelain. But these pipes were not for the ordinary Irish man, or woman. Intricately decorated, they were prized as souvenirs. In a wealthy Irish home, they might have been reserved as a "Sunday pipe."

According to tradition , before smoking, the shank of the clay pipe was dipped into some Guinness or Whiskey. This sealed the mouthpiece and imparted a good flavor to the clay.  Real tobacco was so expensive the peasants could not afford it, so the resourceful Irish came up with a substitute -- coltsfoot, combined with dried wild rose petals and other herbs.  This homemade mix was called "spone."
Happy St. Patrick's Day and Erin Go Braugh!
Don't forget to visit Gemma at Greyscale Territory for Weekend Mailbox.
Posted by Beth Niquette at 10:02 AM

ANother great card. I like the part about soaking the new pipe in whiskey before smoking.

How interesting! All the info about the Irish Pipes! Another translation Ireland until 12/21/2012. Happy PFF!

Wow, what a great card! And again you have done some stellar research, and expanded my horizons!

I'm with Heather - I like the part about soaking a new pipe in whiskey before smoking. What a concept!

This postcard really appeals to me, it is very pretty, and thanks for all the info on pipes in Irish culture.

WOW, what a fabulous post, Beth! You answered many long questions I have ever pondered over. The Irish have a beautiful history, though at times, a very sad one. I have always admired their culture, their strong sense of honor, and belief in family. Perhaps because a bit of the Irish way flows through my veins! :))
Happy Friday, dear friend! May your weekend be filled with sparkles!

Very pretty card! Irish isn't the easiest language to learn but it was compulsory at school. Maybe I found it difficult because it was my first second language, if you see what I mean.

Again, I've not only enjoyed the visual on your site, but I've learned something as well. Color me "pleased!"
~hugs~