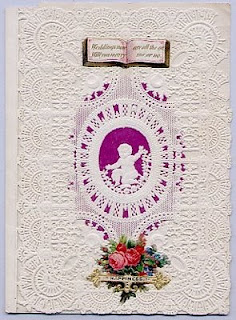 I find it amazing that one woman, Esther Howland, is held responsible for the creation of our modern day Valentine's Day Card.  It goes to show one person really can accomplish incredible things.
In the mid-1800's, with technological advances and the availability of paper, Esther is credited with several innovations in Valentine design. One was the small brightly colored wafer of paper placed beneath, to give contrast under the white paper lace; another was the built-up shadow box. 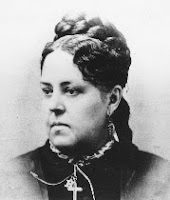 It all began through the family business.  Esther's family operated the largest bookstore and stationery store in Worchester, Massachusetts.  Born in the same time period as poet Emily Dickenson, the young girl received a beautifully intricate English Valentine and was inspired.  She persuaded her Dad to order lace paper and other supplies to make some sample cards, which her brother added to the store's catalog.  They were only expecting $200 in advance orders and were shocked when $5,000 worth of her home made cards were pre-ordered.
Since Esther couldn't make that many cards all by herself, she asked three of her best friends to help out.  In this way a  Valentine's Day Card assembly line was born.  Esther placed her first ad in the local paper in 1850.  The business grew and in a short time The New England Valentine Company was born.  Her cards were so greatly in demand, she quickly rented a small building for the business.
While other companies competed for sales to the public, none could compete with the value, taste, and style of Esther Howland. Her cards set the trend for years.  While she was not the first to create Valentine cards in America, she is credited with having popularized the lace Valentine and turning it into a major industry.
The business flourished despite her semi-retirement in 1866, when a recurring knee injury forced her to use a wheelchair.  When her father fell ill in 1881, she sold her business to George Whitney, in order to care for her father. George Whitney continued to pattern many of their cards in the Howland Style. Esther died in Quincy, Massachusetts in 1904 -- never having married.  The honor, The Mother of the American Valentine appeared in a newspaper article shortly after her death.
To see more wonderful postal stuff, visit Gemma at Greyscale Territory at Weekend Mailbox!

Posted by Beth Niquette at 9:53 AM

I'm having trouble linking up today. Hopefully, I'll get it to work soon.

A bittersweet story. Making the valentine card popular while she never married herself. I imagine her making these beautiful cards and hoping someone will send her one. Or was she just a smart and talented businesswoman?

Such a pretty card. What a talented women, I love the lace effect.

I bet she would be amazed at how different Valentines are today.

I had to wait a very long time for Linky though I only had enter once.

Fascinating history Beth! Thanks for sharing.

I was having trouble connecting to linky too! But I did it and thoroughly enjoyed your Mother of the Valentine post!

Such a sweet story - or, as Bob said, bittersweet. Amazing what one person can do. Lovely history lesson, Beth.

Who would have thought there was so much to a Valentine card? Ironic that she never married herself. On the other hand, I'm married and never had a Valentine. :)

wow! i had NO idea about the history of valentine's day cards...a fascinating post and a gorgeous lace card too! happy PFF (belated - couldn't get the link to work yesterday)...

What a beautiful card, sad that she never married. I hope she was happy!

I hope that you week went well, I've been thinking about you.

I really enjoyed your post. It such a fascinating bit of history. Mine this week has to do with an apple king!

Take care and thanks for hostessing PFF.

Just goes to prove how truly extraordinary we women really are! :))

I have been thinking of you much, Beth. Sending warm hugs your way ...