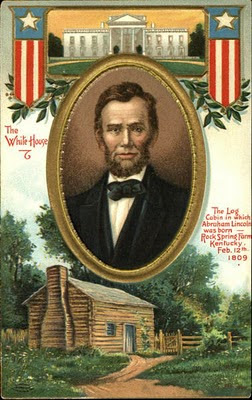 I apologize to everyone for getting this up so late this morning.  Starting next week I will make an effort to have PFF up by Thursday night--this to accommodate those of you who are on the other side of the world from us!  Thank you everyone for your participation in PFF.  I appreciate each and every one of you!
This coming Monday is President's Day in the United States.  Most people take the day off to celebrate.  President Abraham Lincoln is my favorite president.  When I finally get to heaven, I will make a beeline for his mansion.  For years, my Dad has told us, our family has ties to President Lincoln--we're shirt tail relatives, he says.   But besides that, President Lincoln's wisdom and kindness speak to us down through the years.  His insight, courage and rare brilliance are inspiring.
Five months before Abe Lincoln was nominated to run for President, he wrote of  himself,  "I was born Feb. 12, 1809, in Hardin County, Kentucky. My parents were both born in Virginia, of undistinguished families--second families, perhaps I should say. My mother, who died in my tenth year, was of a family of the name of Hanks.... My father ... removed from Kentucky to ... Indiana, in my eighth year.... It was a wild region, with many bears and other wild animals still in the woods. There I grew up.... Of course when I came of age I did not know much. Still somehow, I could read, write, and cipher ... but that was all."
Lincoln  did all kinds of things before he became president.  He worked on a farm, splitting rails for fences, and keeping store at New Salem, Illinois. He was a captain in the Black Hawk War, spent eight years in the Illinois legislature, and rode the circuit of courts for many years. His law partner said of him, "His ambition was a little engine that knew no rest."
He married Mary Todd, and they had four boys, only one of whom lived to maturity. In 1858 Lincoln ran against Stephen A. Douglas for Senator. He lost the election, but when he debated with Douglas he gained a national reputation which won him the Republican nomination for President in 1860.
As President, he built the Republican Party into a strong national organization. Further, he rallied most of the northern Democrats to the Union cause. On January 1, 1863, he issued the Emancipation Proclamation which declared freedom for all slaves.
Lincoln never let the world forget that the Civil War involved an even larger issue. This he stated most movingly in dedicating the military cemetery at Gettysburg.  He said, "that we here highly resolved that these dead shall not have died in vain--that this nation, under God, shall have a new birth of freedom--and that government of the people, by the people, for the people, shall not perish from the earth."
Lincoln won re-election in 1864, as Union military triumphs heralded an end to the war. In his planning for peace, the President was flexible and generous, encouraging Southerners to lay down their arms and join speedily in reunion.
Then, on Good Friday, April 14, 1865, Lincoln was assassinated at Ford's Theater in Washington by John Wilkes Booth, an actor, who somehow thought he was helping the South.   That was a sad day which rings it's sorrowful song down through the ages.  I wonder what he could have done, if he had lived?
To see more wonderful postal stuff, visit Gemma at Greyscale Territory at Weekend Mailbox!

There is a good book on Lincoln and postcards: Abraham Lincoln: an Illustrated Biography in Postcards.

Great president, superb postcard, Mrs. Beth Lincolnsdottir, as an Icelander might call you, in a way. :)

I can remember studying about Lincoln when I was a child in a one room school. A man like him without wealth could never make be elected president today. Too bad. Are there even men (or women) like him running anymore? Nice to read about him again, Beth.

Wonderful card for President's Day. A friend was telling me a story recently about her brother calling it George Lincoln day! :D :D

Great postcard as usual, Beth. Don't be concerned about when you post PFF - we know how to catch up!

Great card which doesn't have to say from a log cabin to the white house, its all there.
Great men appear in troubled times.

Beth you always find perfect cards, and this one of Lincoln is a great one. Hey, he wrote "this nation, under God" and Amen to that. Cool you are shirt tail Lincoln relatives.

I hope you are feeling all right Beth. And I am still sorry about the loss of your dear kitty.
It's been almost a eyar - it's this week 51 for PFF for you?

Howdy Beth
Happy PFF :)
What a great card and I love the history as well as your personal connection !
Thank you for hosting Postcard Friendship Friday .
Take care now
Until Next Time
Happy Trails

What a fantastic postcard for the holiday. Great color, great layout, great man.

hi beth! great card for president's day and PFF! lots of love from debs across the pond on a sunny saturday morning!

Beth, I love your blog - my first time to link on Friendship Friday. I couldn't find any specific requirements. Let me know.
Thanks for hosting. -Rachel

What a great postcard. I'd almost forgotten about the holiday Monday.

Randomly came across your very informative blog and like it!

Hello Beth,
Stopping by to wish you a Happy Presidents Day! I have always had a soft spot for Mr. Lincoln. How I wish he was here today to lead our country ...

Wishing you a bright and beautiful week ahead! Warmest of hugs, P.

I would love to see vintage postcard. The oldest I have a collection/book of are 50 years old.

I just posted mine at my blog, then discovered I can't add my link here.