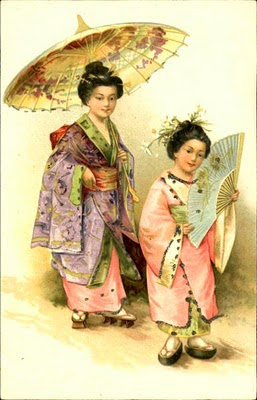 I've heard of the Japanese Plum Blossom Festival since I was a kid.  What I didn't know is the Festival has been held on February 25, for over 900 years! The Spring celebration at Kitano Tenmangu Shrine in Kyoto is said to be one of the most beautiful.
I found an interesting story surrounding the festival.  The Kitano Tenmangu Shrine was built in the year 947, to appease the angry spirit of Saguwara no Michizane, a brilliant scholar and poet.  The lovely gardens surrounding the shrine are filled with Michizane's favorite tree, the red and white plum blossom.
Michizane was educated in a private school run by his father where he studied to become an official in the Court of the Japanese Emperor. His training and skill with Classical Chinese language and literature afforded him many opportunities to draft edicts and correspondences for officials in the Court in addition to his other duties.
He was appointed ambassador to China in the 890s, but instead came out in support of abolition of the imperial embassies to China in 894. Michizane did not speak Chinese.  In fact, most Japanese at that time could only read the Chinese language.
Within the end of Emperor Uda'd reign in 897, Michizane's position became vulnerable. In the year 901, through the political maneuverings of his enemies, Michizane was demoted from his aristocratic rank of junior second to a minor post and was exiled.  He died far from home, friends and family.

After Michizane's lonely death, in an astounding coincidence, plague and drought spread across the country and one by one, all the Emperor's sons died. The Imperial Palace's Great Audience Hall was struck repeatedly by lightning and the city experienced weeks of rainstorms and floods.
After much deliberation, the leadership of the country attributed these disasters to the angry spirit of the wrongly accused Michizane.  To appease the spirit's anger, the imperial court built a Shinto Shrine called Kitano Tenman-gu in Kyoto and dedicated it to Michizane. They posthumously restored his title and office and struck from the record any mention of his exile. Michizane was deified as Tenjin-sama, or Kami of scholarship. Today many Shinto shrines in Japan are dedicated to him.

What an interesting story.  I'd never heard it before.  I love a good story--everyone does.
To see more wonderful postal stuff, visit Gemma at Greyscale Territory at Weekend Mailbox!

Posted by Beth Niquette at 1:37 PM

" They posthumously restored his title and office and struck from the record any mention of his exile."
Now your blogpost mentions his exile, for the cyberspace record.
Brace yourself for the reaction from the angry spirit of Michizane!...
Japanese Revolution?
Nice postcard!
:)
============
Enjoy my Abe dorincards! :)

What a great card and a wonderful factual story. Thank You so much, I really enjoyed that.

I'm sorry, I'm still choking on what Dorincard said! I hope you are well braced!!! I guess you have unstruck the record (so to speak) of his 'exile' (if it was so well stricken, how come people know about it???) ...

What a beautiful postcard, sissie. Don't worry, we'll protect you from the angry spirit of Mr. Michizane!

I wonder what would have happened if they hadn't built the shrine.

A card that is as beautiful as the plum blossom festival.
Never cross a poet.