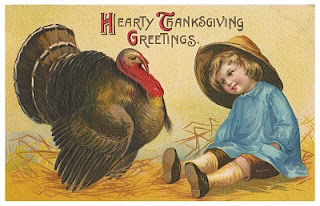 Isn't this just the cutest postcard?  I think that child should be a little scared --That bird is bigger than he is!  One gets the idea the boy is dreaming about something...maybe Thanksgiving dinner?

Did you know President Abraham Lincoln proclaimed Thanksgiving as an official holiday in the United States on October 3, 1863?  It is another great reason Lincoln is one of my favorite presidents!   Sarah Hale, editor of Godey's Lady's Magazine lobbied for 17 years to declare Thanksgiving as a national holiday.  By 1916, Thanksgiving was referred to in writings as Turkey Day--And I thought that was a modern title!

Did you know President Franklin D. Roosevelt actually attempted to move the Thanksgiving to earlier in November? As a depression recovery strategy, he thought the change would encourage a longer Christmas shopping season. But the idea didn't fly and was shut down by Congress.  In 1941 the official date was declared permanently as the fourth Thursday in November.

Posted by Beth Niquette at 8:19 AM

Nice vintage card...but soon, one of those two beings might get a serving from the meat of the other. Such is life...:)

Very cute! Yea, that's a big turkey for a little boy to be sitting next to. :)

No Thanksgiving in the Netherlands, but we do like turkey. I think it's a strange, and indeed a bit scary animal. Once in a national park in Australia, a wild turkey suddenly crossed our path. It was as surprised as we were.

That really is a cute card. We have some wild turkeys that come roam around our condo area from the woods on one side of us. They go to eat up the fallen birdseed from feeders people have. They are messy birds and funny when they try and fly.

It's a very cute postcard! No turkey in the UK until Christmas usually. But we have Guy Fawkes Day today, with bonfires and fireworks.

I love TURKEY DAY... we invite friends each year to join us to share a wonderful dinner. I think it is my favorite meal to prepare!

Happy Friday, Beth!! Another lovely card! Indeed, the turkey looks as though he aims to gobble up the little one!

I too favor Mr. Lincoln! :)) Always a pleasure visiting your special place, my friend! Wishing you a peaceful and soulful weekend!

Lovely postcard. Thanksgiving is not really celebrated here in the UK, but I have fond memories of being in the US a few years ago and going to a restaurant on the edge of Central Park (forget the name now) for a Thanksgiving Meal. I always think we should do a Thanksgiving style meal but before I know we've missed the date and it's already Bonfire Night.

This is such a lovely blog here.. I'm glad to stop by..