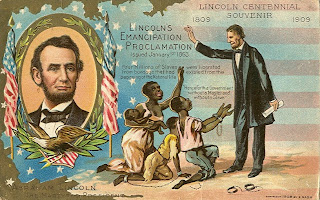 The Gettysburg Address was given in Pennsylvania at the dedication of the Soldiers' National Cemetery on  Thursday, November 19, 1863, by one of America's most beloved Presidents, Abraham Lincoln.

The United States was still in the grip of a terrible civil war when President Lincoln spoke those famous words.  His carefully crafted address came to be regarded as one of the greatest speeches in American history. In just over two minutes, Lincoln invoked the principles of human equality found in the Declaration of Independence and redefined the Civil War as a struggle not merely for the Union, but as "a new birth of freedom which would bring true equality to all of its citizens."  The fight for freedom for all peoples continues here to this very day.

I have a special place in my heart for this wise man.  Not only was he one of the greatest men who ever lived, He is a distant relative of mine.

Posted by Beth Niquette at 6:20 AM

I remember memorizing the Gettysburg address when I was a kid and then when I visited Gettysburg, it was a humbling experience. Beautiful post!

wow, I've never been the first to link up before!

I love Lincoln. I was just reading about his home in Springfield and thinking about visiting it if we go to Missouri next spring. I'm wanting to take a trip to Hannibal to see all of the Mark Twain stuff there...my son is reading lots of Twain this year. Springfield is only about 1 1/2 hrs. away so I was thinking of taking a little side trip.

Great leader! We should read more about him.

have skipped a few friendship fridays...i've missed them! what a great card to come back to...and you're distantly related to AL? wow! something to be proud of for sure...happy PFF!

What a wonderful relative to have, no matter how distant! Great card too. :)

Wonderful postcard. Your distant relative was a hero.

Happy Friday, Beth! Another fabulous post! I too adore Mr. Lincoln ... how splendorous for you to be a descendant of his! I knew there was something extraordinary about you! :))) Indeed, he was a brilliant man ... how I wish our country could once again be blessed with another leader like him.

Elected as the 16th President this month. I only know that because by strange coincidence just read an article about the presidential election "a country at the crossroads". A wise and determined man. No matter how distant, great bragging rights.

I'm in! Great image I might add. Lincoln was a President, right? I'll stick with the theme - Cleveland was a president as well! Thanks for hosting, Beth!

And I almost forgot - I know a fellow (I bought art supplies from him years ago) by the name of Abe Lincoln - and he's related. He has a couple of blogs.

What a wonderful postcard and remembrance of Lincoln.

Hi Beth, I just read that Steven Spielberg is gonna make a film on Lincoln. Daniel Day Lewis will play him. Sounds like a film I would love to see.

What a coincidence. We are in the middle of the Blue and the Gray dvd with Gregory Peck as Abraham Lincoln. I like your blog.