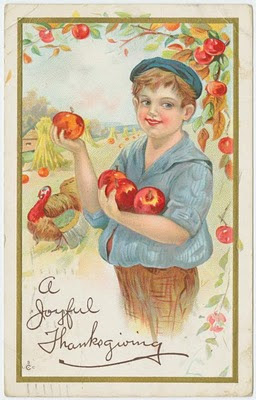 What a joyful Thanksgiving it was!  I look around the room savoring this time with my family and wonder what those who first came to our country on the Mayflower would think of our Thanksgiving celebrations today.  How brave those first explorers were.

The first winter was so bad most of the colonists remained on the ship, where they suffered from exposure, scurvy and disease. Only half of the Mayflower’s original passengers and crew lived to see spring.

When the settlers moved ashore, they received an surprising visit from an Abenaki Indian who spoke English. Several days later, the Native American returned with Squanto, a member of the Pawtuxet tribe who had been kidnapped by an English sea captain and sold into slavery.  Squanto had escaped his captors, finally making his way back to America.  Despite his experiences as a prisoner, Squanto took pity upon the Pilgrims and taught them how to cultivate corn, extract sap from maple trees, catch fish in the rivers and avoid poisonous plants. He also helped the settlers forge an alliance with the Wampanoag Indian tribe -- which lasted for more than 50 years.

In November 1621, after a bumper crop of corn and other staples, the grateful Pilgrims organized a great feast and invited their Native American friends to join them. Now remembered as American’s “first Thanksgiving,” the festival lasted for three days.

Posted by Beth Niquette at 8:12 AM

Stunning card! And thank you for the history...it's nice to read a back to basics blog post for those of us that live the other side of the Atlantic and are a bit fuzzy about the whole Thanksgiving thing! Btw...I love that this card is signed "Granma" - my maternal grandmother was always known as "granma" rather than "grandma" too!

Always love the cherubic look on the faces of any children on these vintage cards. Children may not actually look like that, but the pictures certainly capture their essences.

I had this same card on my blog a couple of weeks ago, along with some of my vintage apple thingies.

The first apples are a wonderful part of the year and great on this postcard as a symbol of abundance.

Lovely postcard, Beth, and how nice to be reminded of the first Thanksgiving story. Hadn't really heard it for a long time so how nice to really think about it again. Carol

The boy with the apples is very charming and thanks for posting about the first Thanksgiving.

I'm learning more and more about Thanksgiving all the time! A beautiful card and a very interesting post, thank you!

I agree with Debs: informative post for us from the other side of the Ocean. Beautiful card. Happy PFF!

It's just lovely Beth! I especially like his rosy cheeks.

Thank you for a great refresher of our first thanksgiving, I'm not sure what the Canadian version of that is, isn't that awful. Too bad Canadian/American and Indian relations can't be that good today. Sounds like your thanksgiving day was wonderful.

I looked up the card on Dorincard's wonderful blog and discovered the card on http://postcardy.blogspot.com/2010/11/vtt-apples-and-thanksgiving.html is not the same postcard, but it is by the same artist! Be sure to drop by and take a look!