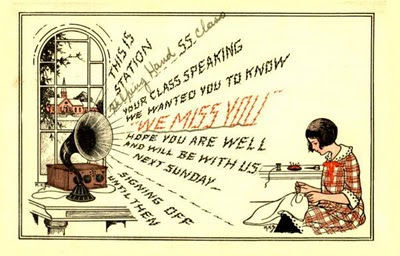 I found this postcard online and thought it perfect for the day.  It is an old American Sunday School Union postcard from the late 1920's.  When I was a girl my family attended a church in the hills sponsored by that very organization.
National Radio Day has more modern origins!  It seems to have been kicked off in the 1990's when radio station personnel began talking about creating a holiday just for them.  Though there are no congressional records or presidential proclamations designating August 20th as National Radio Day, it seems to have become a well-known holiday in its own right.
The invention of the radio dates back to the late 1800s.  A number of inventors were responsible for the inventions and discoveries required to make the radio a reality. This included both transmission and reception methods and technology. The radio evolved from the telegraph and the telephone and the early wireless telegraph.

Posted by Beth Niquette at 7:01 AM

"We interrupt this broadcast to tell you that one day in the future, Beth Niquette will upload a cool postcard about radio." :)

Beth what are the chances of you finding a radio card you have some sort of connection? Awesome. Thanks for sharing Happy PFF!

I love the card! No chance of escape from Sunday School. :)

I think I will start looking up special days before I do my PFF posts.

I love that card! Wouldn't that be a cool one to own?

Love your card and most certainly Happy National Radio Day.

What a cool postcard!

I had no idea! So - do you keep a calendar of all the national and international days to celebrate?

I work for the Communication Department of American Missionary Fellowship, which is what the American Sunday School Union is now called. We just did a national newsletter about various communication media . . . wish we'd seen this postcard before it was done! Thanks for posting it.