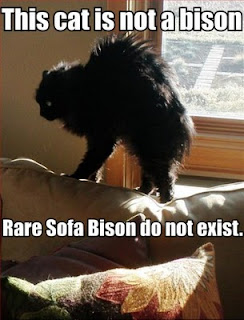 Yes, it is Friday the Thirteenth--hence this hilarious postcard I found online sometime ago.  However it is also, happily, International Left Hander's Day!  This delightful holiday was first celebrated on August 13, 1976.  It was started by Lefthander's International.

Did you Know?
* While many people are left handed, very few are 100% left handed. For example, many Left handers golf and bat right handed. On the other hand, there is a high percentage of righties who are 100% right-handed.
* Sinistrophobia is the fear of left-handedness, or things on the left side.
* Lefties are also called "southpaws."  The term was coined in baseball to describe a left handed pitcher.
* Tuesdays are Lefties luck day.
* Only about 10% of the population is left handed.
* During the 1600's, people thought left handers were witches and warlocks.
* It is believed that all polar bears are left handed.
* There is a rumor octopi have but one right hand. Scientists are diligently studying this issue.
* Right handed people operate in the left side of the brain. Left handed people use the right side. Therefore, only left handed people are in their right mind?

Lefthander's Slogan:  Everyone is born right-handed. Only the greatest overcome it.

I am ambidextrous! When I use chopsticks, or eat using utensils with my left hand, things actually taste different--suffice it to say, I think it may be true that Left Handers do indeed experience the world a little differently than the rest.

Posted by Beth Niquette at 7:23 AM

Very interesting! I heard, I don't know where, that left-handedness is increasing. I am largely right handed but do quite a number of things left-handed - shuffling cards, opening bottles.

I didn't realize it was Friday the 13th. I should have posted a "Good Luck" card.

My partner is left handed I will have to tell him today is his own international day:-)

I do most things right handed but do favor my left hand when reaching for items, doing craft projects etc. My Dad wrote with his right hand but fished and played ping pong with his left hand. I use to sit at the desk and try writing with my left hand just for fun.

Great post on left handers... in my family 50% of my siblings are left handers? We beat the odds!

And by the way ... left handed people are the ONLY people in their right mind! :))))

Wishing you a Friday filled with faery blooms and pixie dust!!

Thankfully, I have my black cat by my side for Friday the 13th. Since I've been owned by two, I've never considered the black cat a sign of bad luck. ;)

I am right handed, but have always been able to write pretty good with my left. I don't do it often, but it can be done! lol

It's sad to me that there was a time when left handed children had that hand tied behind their backs as a way to force them to use their right.

I'm left handed. LOVE the slogan at the end. After reading your post, I'm wondering why lottery day can't be on Tuesday rather than Wednesday or Saturday???

I am indeed a left-hander! Your postcard is a funny one! :)

Totally slipped my notice that this was Friday the 13th! I have quite a few black cat pictures and postcards. Happy PFF, Beth.

Fun postcard-I met my husband on August Friday the 13th-seventeen years ago!