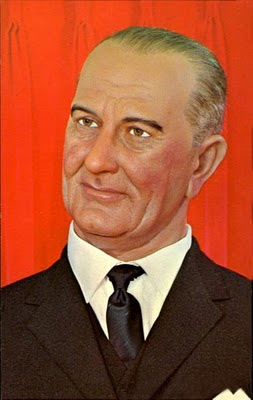 In an address before Congress President Johnson pledged support for Kennedy's legislative agenda which  included civil rights and education.  Along with supporting the civil rights movement, Johnson overcame southern resistance and convinced Congress to pass the Civil Rights Act of 1964, which outlawed many forms of racial segregation. Johnson signed it into law on July 2, 1964.

Then in 1965, he achieved passage of a second civil rights bill, the Voting Rights Act to outlaw discrimination in voting and to allow many Black Americans in the southern states to vote for the first time.  I was astonished to discover some people were not allowed to vote, clear into the mid-1960's, because of skin color.  THAT is a SHAME.  I'm glad today every Citizen of the United States has the right and opportunity to vote.

When he left the presidency in 1969, LBJ returned to Texas. During his retirement he wrote The Vantage Point, taught students and participated in a series of national symposia on the critical issues of modern America. Johnson died at his ranch on January 22, 1973, and is buried in the family cemetery at the LBJ Ranch near his birthplace. Shortly after his death, the Texas State Legislature created a legal state holiday to be observed every year on August 27 to honor Johnson. The holiday was first celebrated on August 27, 1973.

hi! am back from my hols and checking out PFF...glad to be back! this was a fascinating entry...that's a great wax likeness of the man on that card. i had to double check the back of the card to see if it was a "real" image of him or not!

As a politician, he did some good deeds. How about bad ones?
Have a great weekend! :)

I've come back from wherever I was to join PFF today! Some folks take the right to vote so seriously they live and vote in two states.

WOW amazing that it was just 1965 that all citizens were given the right to vote... great post! TFS

It wasn't so much that blacks didn't have the right to vote. The southern states used various means of keeping them from voting.

I thought it was a very odd picture of LBJ, but then I read further. :)

Thanks for the info on LBJ; hey, he shares a birthday with my husband. Month and day, not year :) I love Ladybird's wildflower efforts too.

I didn't realize this was LBJ day! I went to his ranch on vacation once when I was a kid. I'd like to go back and take my kids.

Hoping to get a PFF post up today. If not, I'll be back next week. Its been crazy here since we moved!

I'm back from my American vacation (a.o. I did a road trip through California with my eldest son, who is nearly 18).

Interesting post. At the time Johnson was for many young people in the Netherlands "a murderer" because of the Vietnam War. What you wrote about his acts against segregation gives a completely different view.

Happy to be back at PFF!

I, too, thought the picture of LBJ was strange - but now I know. Interesting post, Beth.

LBJ. Lots of use of his initials in the anti Vietnam war efforts of the day.

Excellent post (and yes, scary wax version of LBJ). His presidency was overshadowed by the Vietnam War, but he was great on civil rights. His Great Society programs attempted to alleviate urban poverty, with aid to cities and the poor. That's when there was a consensus that government had an important role to play in helping people in need. Can you tell I write editorials for a living? I'll shut up now. Happy PFF.

Hope your week-end is going well. I loved JFK, but for some reason, just didn't care much for Johnson.