Fly the Flag and Hug the Cat - Postcard Friendship Friday #13

NOTE to those who are new to PFF:  Postcard Friendship Friday was started by Marie, who because of her loss of sight, handed it over to me. Marie’s idea was for people to post their postcards, then visit each other’s blogs to view them. PFF is NOT a place for people to sell, or advertise ephemera. This is an event where FRIENDS who love postcards interact.  If you are selling or advertising, the link to your blog will be removed. 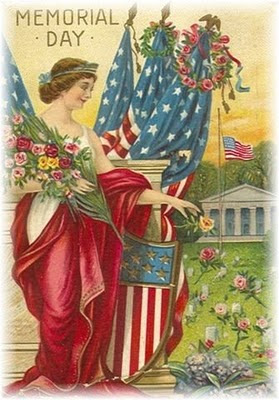 It is Memorial Day Weekend, a time when many people visit cemeteries and memorials to honor those who have died in the line of duty.  Memorial Day was first observed in Waterloo, New York in 1866.  In 1968 US Congress created a three-day holiday.  In 1971 the law moved Memorial Day to the last Monday in May.

One tradition is to fly the United States flag at half-staff from dawn until noon.  Volunteers often place American flags on each grave site at national cemeteries.  In our little town, American flags bravely bloom all along the sidewalks for the duration of the weekend.

Families often gather for fun, games and picnics.  Barbecued foods are VERY popular on this holiday.  One of the longest standing traditions is the running of the Indianapolis 500, an auto race which has been held during the Memorial Day holiday since 1911. 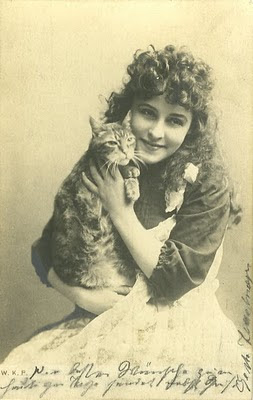 Today is also Hug Your Cat Day!  There is plenty of documentation that this holiday is celebrated world wide--though some do so on May 28th, others on May 30th.

No one knows how this holiday originated, but it is a splendid Idea.  It is a proven fact the Friendship of an animal, can actually lower a person's blood pressure.  The holiday is celebrated by spending time with one's cat, giving them extra special attention. Cats and humans have had a long history of Friendship.  In 2004, a grave was excavated in Cyprus which contained the skeletons of a cat and a human being laid close to one another.  The grave is estimated to be 9,500 years old!

Posted by Beth Niquette at 4:08 AM

I didn't know it was "Hug Your Cat Day." That's one of my favorite kinds of postcards, so I think I'll add one to the end of my post.

Hug your cat day! Who knew? But I am in favor. Really lovely Memorial Day card, too. Thanks for providing the history behind the cards on your PFF posts.

Hug Your Cat Day? I love that. Beautiful card by the way. And let me thank you, Beth, for hosting PFF again!

Beth: you are up early today!!! Thanks for sharing the great Memorial day card.

Love the card. I will be sure to hug my cat today...although I don't think she'll be very happy about that!

Oh wow, I didn't know about Hug Your Cat Day! Gracie and I are going to have to celebrate!

You always have great, vintage postcards! :)

hug your cat day?!! who knew?! am recovering from flu so am skipping PFF this week but couldn't resist popping by to see what everybody else had posted!...xxdebs

I saw your postcard of Memorial Day and thought that that is a perfect card. Then I scrolled down and saw the sweet card of the cat being hugged, and my cat and I very much approve of this card too. Well done!

Every day should be hug your cat(s) day!!! :) ~ Beth, I wondered how PFF started and what it was about, thank you for enlightening me! Your Memorial Day card is lovely ... a beautiful and thoughtful remembrance for those we have lost.

Wonderful cards, Beth. Thanks for letting us know about Hug Your Cat Day .... that's a card I can handle! :D :D ;D ;D Have a wonderful weekend.

Such a Wondrous Place this Faery Space said...

Human hugs are good and I like the Hug a Cat day idea, I will have to go out and find one.
Beautiful card for memorial day.

I don't have a kitty to hug, but I would if I could! The PFF is fun and, aw shucks, Beth, you make me blush with your nice words! Have a great holiday weekend. Carol

Lovely postcards! And Hug Your Cat Day? Better go next door and get my hugs in!

We sure do have a lot to be grateful for - thanks for the reminder!

Hello Beth, this lovely photo will be the link to you on my cat blog !! thanks so much for all your sweet comments, have a fun creating day, hugs :)