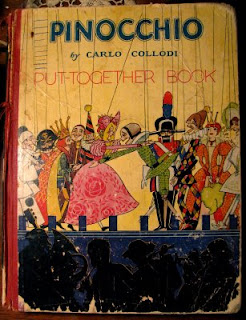 This book is fascinating! It was a gift to my son from his Grandmother. I read it to him when he was small and he was totally absorbed by the story. It became one of his favorites.

This version of Pinocchio was called a "put together book," because it came with sheets of stickers, which were then cut out and carefully affixed to the large illustrations within.
Posted by Beth Niquette at 7:30 AM

What a treasure! The colors are still so vibrant and beautiful, and I love the silhouettes of the orchestra at the bottom.

Oh what a fabulous keepsake. A lovely cover illustration.

I hope your day has been beautiful.