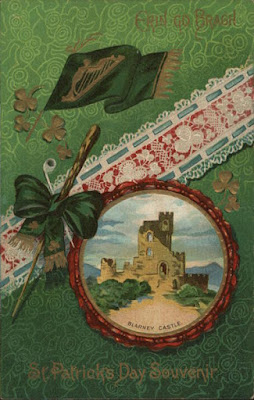 On Daddy's side of the family, we are as Irish as they come.  When I was a little girl I knew Dad was part Leprechaun.  Indeed--that is what he used to tell us.  A bit of the "blarney." for sure.

To kiss the Blarney stone, one must hold tight to an iron railing and lean backwards from the parapet walk. It is said once a person has kissed the stone, it bestows the gift of elegant speech.

There are all kinds of interesting stories of the stone's origin.  Some say it was Jacob’s Pillow, brought to Ireland by the prophet Jeremiah. There it became known as the Lia Fail or ‘Fatal Stone,’ used as a "coronation stone" for Irish kings. Others say it may be a stone brought back to Ireland from the Crusades – the ‘Stone of Ezel’ behind which David hid on Jonathan’s advice when he fled from his enemy, Saul. It was often called the Stone of Destiny.

So, how did the Blarney Stone end up in Ireland?  When the King of Munster sent five thousand men to support Robert the Bruce in his defeat of the English at Bannockburn in 1314, a portion of the historic Stone was given by the Scots in gratitude – It was returned to Ireland and set into the wall of Blarney Castle.

The story of the Blarney stone's peculiar power begins during the reign of Queen Elizabeth I, who sent a deputy to Cormac MacDermot MacCarthy, Lord of Blarney.  The Queen demanded that Lord MacCarthy give up his lands to English rule.

In response to her ultimatum, Lord MacCarthy set out for England to talk to the Queen.  Now Lord MacCarthy was notoriously known for his lack of fluent speech.  Even so, though he doubted he could win the favor of the Queen, his love for Ireland took him to England to attempt to plead for the traditional right to his good land.

He began his journey to England with a heavy heart.  He had only traveled a short while when the weather took a turn for the worse.  He spied a campfire along the road tended by a little old woman.  Shivering with cold, he asked if he could sit next to her fire and offered to share some of his provisions with her. As they sat in silence, tears coursed down his face.  The old woman noted his sadness and asked why he looked so forlorn.

In halting speech, he told her of his sad predicament and the elderly woman, having compassion upon the man, said "Lord Cormac, when Blarney Castle was built, one stone was put into place by a man who predicted no one would ever be able to touch it again. If you can kiss that stone," she explained, "the gift of eloquence will be conferred upon you."

Filled with hope, Lord MacCarthy immediately journeyed to Blarney Castle where he succeeded in kissing the Blarney Stone.  As a result, the legend tells us he was able to address the Queen with speech so soft and words so fair, that as long as he lived he never had to renounce his right to his lands.

Today, kissing the stone is said to endow the kisser with the gift of the gab. My sweet friend Peggy visited Blarney Castle, kissed the stone and of course, is gifted with the "Blarney."  Whether it is a natural gift, or one conferred upon her the day she kissed the Blarney Stone is anyone's guess!

Have a lovely day, and Happy Postcard Friendship Friday!