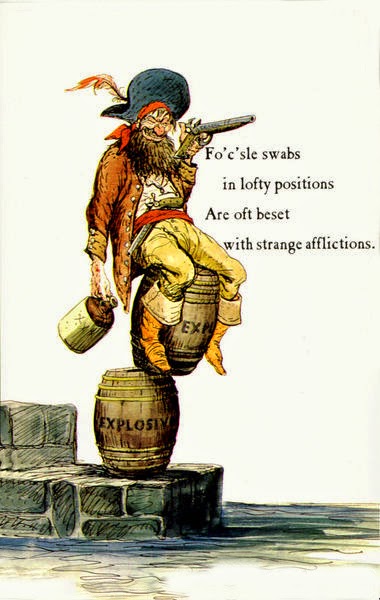 Today is International Talk Like a Pirate Day.  This strange holiday was created in 1995 by John Baur, otherwise known as Ol’ Chumbucket and Mark Summers, known as Cap’n Slappy.  Both men are from Albany, Oregon where on this day many folks greet one another with “Ahoy, me matey!”

The holiday began as a result of an in injury during a racquetball game between Summers and Bauer, one of whom reacted to the pain with by shouting, Aaaaarrrr!  Thus the idea was born.

At first it was an inside joke between two friend.  But the holiday gained exposure when they wrote a letter about their invented holiday to the American syndicated humor columnist Dave Barry in 2002. Barry liked the idea and promoted the day. Growing media coverage of the holiday after Barry's column has ensured that this event is now celebrated internationally.

In the United States, Michigan and California have officially recognized the holiday.  To its credit, Krispy Kreme gives out free doughnuts to people who talk and/or dress like pirates today, and Long John Silver's has a similar promotion.

So if you see a pirate or two wandering the streets, it isn’t Halloween yet, it’s just a bunch of pirates talking fun, likely from Albany, Oregon.

Ahoy me maties!  And Happy Postcard Friendship Friday!  (I apologize for the lateness of this upload--blogger was having some problems.)

*  REMINDER: Comments and links which contain advertising will be deleted. Also, any and all suspicious links which do not lead to a correct website will be reported and deleted.

Posted by Beth Niquette at 7:00 AM