The Wearing of the Green -Postcard Friendship Friday #110 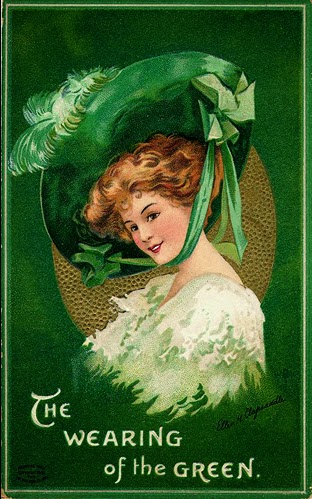 In the 1700's all of Ireland's lands were confiscated by the British.  Over 500,000 Irish Irish families were evicted, or were forced to pay rent for the homes and lands they'd previously owned.

In response to this injustice, a full-fledge rebellion broke out.  In 1791, in opposition to British rule, the Irish formed a political group called the "United Irishmen." The symbol of this group became the green banner with a golden harp on it.

After attempts by the British Government to extinguish the United Irishmen, a series of small battles broke out in the countryside. In 1798, the rebels stood their ground at the battle of Vinegar Hill, near Enniscorthy. The Irish were sadly outnumbered and many brave men died. From that time onward the "wearing of the green" has been a symbol of Irish unity and cultural identity.

During the great famine, when millions of Irish left their homeland for America, the "green" came with them,  symbolic of the Irish struggle for independence.

In the U.S, the first St. Paddy's Day parade took place in 1779.  Since that time there are parades all across America celebrating the wearing O' the green.

I am proud of my Irish heritage.  The Irish are big-hearted, sometimes hot tempered, spunky and tough--as well as innovative, smart and creative.  And not to mention a bit fey!

Have a lovely weekend, and Happy Postcard Friendship Friday!

It is a sad fact that few political lessons are ever learnt. Fine postcard.

She is a lovely Irish lass. Happy PFF!

(Glad everything is working out with insurance/clean up. Think of you often.)

She wouldn't be wanting to tilt her head much more for fear of losing that massive hat!

Hi Beth: Thank you for dropping by, but most importantly thank you for your prayers, I'm 100% sure that prayer is what's keeping my sister alive. She's coming along VERY slowly. Still all those underlying problems of breathing and walking and such, but she's able to get out of bed and have dinner at the table, now she may go right back to bed afterwards, from the exhaustion this caused but she is getting out a little more frequently, and a little more often. She's had a rough year, and it's only March. Thank You again.

I love this card, when I got married, I was bound and determined to wear a hat like this, It was almost as big, but not quite as lavish.

Top of the morning to you!

She has a beautiful hat and the smiling Irish eyes!