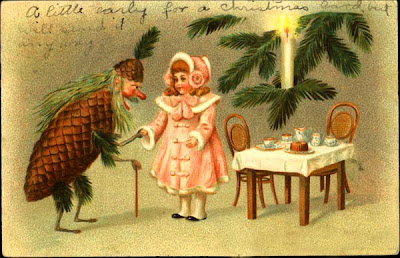 This is one of the oddest Christmas postcards I've ever found.  This wee girl is having tea with a very interesting fellow--a pine cone man.  I couldn't help wondering what the story was behind this one!

So I did a fair amount of research and discovered these postcards were a product of the Curt Teich Printing Company, founded in the late 1800's by German immigrant, Curt Otto Teich.

The only story I could find which might throw some light on this delightful pine cone character comes from Germany.  With a few embellishments of my own, I have re-written the charming Legend of the Silver Pine Cone.

There once lived a poor family who had fallen on such hard times, the Father was forced to travel far from home to find work to support his family.  They did not hear from him for a long time.

Then came the day the family came to the end of their stores of food and did not have enough wood for their fire. Things became so desperate, the Mother decided to go to the forest to gather pine cones in order to build a fire to keep her family warm. She wrapped a tattered shawl around her shoulders and with a basket ventured into the bitter cold.  As she traveled, she dreamed of finding enough to take to the marketplace to sell, so her family would have food to eat.

After walking for hours, the faithful Mother finally reached the forest and began gathering pine cones into her basket. Suddenly, she heard a voice say, “Why are you stealing my pine cones?” With that, an elf appeared beside her.

Exhausted and choking back her tears, she explained her sad dilemma to the tiny man.  With a crooked smile and a flourish of his pointed red cap, the elf said, “Go to the next forest. The pine cones are much better there.”

Pouring the pine cones back onto the ground, she set off once more.  By the time she reached the edge of the next forest, she could not take another step.   Trembling, she dropped to her knees in the soft pine needles and leaned her tired body against a tree, her empty basket tumbling down beside her.

No sooner had she done this, dozens of pine cones started falling to the ground. Filled with renewed hope and energy, she tucked as many pine cones into her basket as she could and walked the long trek home.

Foot sore and weary, she set the basket down on her doorstep.  A tired smile crossed her face as she heard the laughter of her children through the door.  Tears filled her eyes.  Even when faced with cold and hunger, her children still found laughter.  The dear little Mother's heart was filled with hope.

But when she bent to pick up the basket of pine cones it was so heavy she could not lift it.  She opened the door calling the children to come and help.  When she and the children looked closer at the basket of pine cones, they discovered the pine cones had all turned to silver.  Not long afterward, the Father arrived home with a sack of food, which they prepared over a crackling fire. From that day forward, the family never had to face hunger and cold again.

Because of this legend, many people believe pine cones are lucky.  I've seen silver pine cones in stores around Christmas, but had no idea there was a story behind them.  In Germany, it is customary to keep a pine cone on the dresser, or hearth to make sure good fortune comes your way.

That is an interesting legend that I hadn't heard before.

This is my first visit here - What a delightful surprise!

I love this card and the story you found. I've always thought pinecones were lucky --- beautiful gift! Happy PFF!

Beautiful card and a very sweet story, Beth. Thanks. The card also reminded me of the tea party of Alice in Wonderland. Happy PFF.

That is a great story, but Mr Pine-Cone looks a bit creepy in this postcard (not like the Mr Peanut man!)

What great story, I've always wondered about the silver pinecones. I love pine cones and have longed for one I see at the One of a Kind show, it's probably 5ft long, but it's got a hefty price tag.