Under the Mistletoe - Postcard Friendship Friday #94 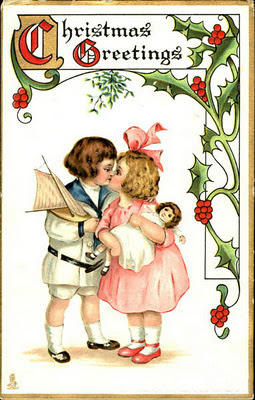 I love mistletoe.  When I was a youngster, my sister and I cut down a bit of mistletoe from an oak tree.  It was two feet across!  That ball of mistletoe hung from the back porch ceiling for years.  I always put up a bit of mistletoe somewhere in the house at Christmas time.  I like to surprise my darling with a kiss!

There are many ancient folk tales revolving around mistletoe.  The one I like best is about the Norse goddess Frigga and her son Balder--god of the summer sun.

One night, Balder had a dream which greatly alarmed his mother.  He dreamed of his own death.  It was said if Balder died, all life on earth would end. To keep this from happening, Frigga went at once to air, fire, water, earth, and every animal and plant seeking a promise that no harm would come to her beloved son.  Balder could not be hurt by anything on earth, or under the earth.

But Balder had one enemy, Loki, god of mischief and evil.  He knew of one plant Frigga had overlooked. It grew neither on the earth, nor under the earth, but on apple and oak trees. You guessed it--the plant was the lowly mistletoe. Loki made an arrow tip of the mistletoe, gave it to the blind god of winter, Hoder, daring him to shoot Balder.  Hoder, believing nothing could hurt Balder shot the arrow, striking Balder dead.

The sky went black and all things in earth and heaven wept over Balder. For three days each element tried to bring Balder back to life.  Alas, they were all unsuccessful.

As his mother wept over him, her tears were turned into the pearly white berries on the mistletoe plant.  Then to her great joy she realized her tears of sorrow had restored Balder to life.  Frigga kissed everyone who passed beneath the tree on which the plant grew.

The story ends with the promise that whoever stands beneath the mistletoe, no harm should befall them, only a kiss, a token of love.

Posted by Beth Niquette at 8:24 AM

I love that legend (myth! As always, I like so much your vintage cards. They have an innocence that lacks in today's cards, even for kids.

I love the legend too ... and I remember the mistletoe we got that year as well ... wasn't that the one we got up by Annette's place? The tree we climbed was covered with leafless vines ... and I ended up with one of the worst cases of poison oak I'd ever had!!! I never looked at mistletoe the same way again! :=}

I haven't heard that story before but I love it!

I had never heard that legend...very interesting! And the card is so pretty!

A lovely card. Sadly, no festive cards in my collection, but I do have a rather lovely New Years Card for the end of the month.

I love the legends you tell us, and a wonderful card as usual.

Cute little card. Wishing you and your family a very Merry Christmas.