NOTE: You don't have to stick to the theme I choose each Friday. Just put up the postcards you love and tell us why you like them! Have fun everyone! 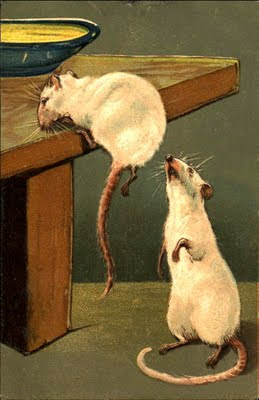 There seems to be some confusion about the actual date of Rat Catcher's Day--a celebration commemorating the myth of the Pied Piper of Hamelin, Germany.  The confusion comes because the Brothers Grimm cited June 26, 1284, as the date the legendary Pied Piper led all the children out of the town, while the poem by Robert Browning gives the date as July 22, 1376.

According to the Brother's Grimm, Legend has it that the town of Hamelin, Germany was overrun with rats.  The rodents ate the food, fouled the water and made the people very sick.  At the height of this infestation a strange man wearing a coat of many colors arrived in town. He was brought to the leaders of the town, where he told the town council he was a rat catcher and could free the town of the plague of rats for a fee.

The citizens were desperate and pledged to pay him the money he'd asked for.  Then the oddly dressed man extracted a fife from his knapsack and began to play.  The the people's amazement, all the rats came running out to gather around the Pied Piper in a seething, bare-tailed mass.   As he played, he led the rats straight into the River Weser where they drowned.

Sadly, the townspeople, now freed of the plague of rats, regretted their promise and refused to pay the Piper.

Later that year, the Pied Piper came back, but this time he wore a tall red hat and was dressed as a huntsman.  Since it was Sunday, all the adults were attending church.  Once more the Piper sounded his pipe.  The babysitter was unable to stop all the town's children, ages four and above, from following the man--they skipped merrily along behind him, to disappear with the Piper through a doorway which had appeared inside a cave in the side of a mountain.

The babysitter carried the news of the children back to the town. Anxious parents ran in droves to the town gates seeking their children. But by then, the door in the cave had vanished.

Legend has it 130 children were lost. Two had lagged behind and came back. One of them was blind and the other mute. The blind child was not able to point out the place, but was able to tell how they had followed the piper. The mute child was able to point out the place, although he (or she) had heard nothing. Another little boy in shirtsleeves had gone along with the others, but had turned back to fetch his jacket and thus escaped the tragedy, for when he returned, the door in the cave had disappeared. The cave is still shown to this day.

The mountain near Hamelin where the children are said to have disappeared is called Poppenberg. Two stone monuments in the form of crosses have been erected there, one on the left side, one on the right. Some say the children who were led into the cave, lived to emerge from a mountain in Transylvania.

The following lines were inscribed on the town hall:

In the year 1284 after the birth of Christ
From Hameln were led away
One hundred thirty children, born at this place
Led away by a piper into a mountain.


Most legends contain a grain of truth.  One wonders about the real story behind this old German Legend.

This is the first time that I have heard a detailed account of this story. Thank-you

the Pied Piper was always one of my favourite stories for some reason, even though it's really quite scary when you think about it.

I'm with Heather on this -I've never heard the entire story. How interesting. What a Cold Case this legend contains. And who would have thought there is such a thing as rat catcher's day. I'd hate to think what we should serve for Rat Catcher Dinner!

I guess I really didn't know much about the Pied Piper and nothing about rat catcher's day! Oh, Beth, what a sad story. Do have a good weekend!

What a great card and explanation!

Had never heard of rat catcher day before - thanks for the history lesson. I have no rodent related postcards so have not kept to theme this week. Happy PFF everyone.

The postcard looks really nice and vintage. Thanks for hosting the meme

Nice card. The legend of the pied piper, although with so many variants now, lives on. Interesting theories about the piper's background and the events surrounding this story.
Enjoy your weekend, Beth.

have always loved this sinister tale...I even played the part of the Pied Piper of Hamelin in a school play when I was very young ;-)

Nice vintage card,I want like of yours in my postcard collections^_^