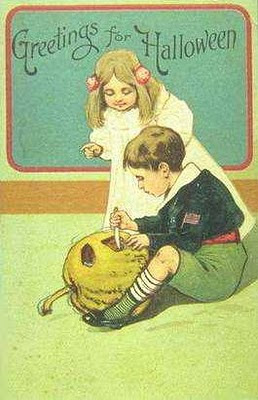 This postcard is from my Cyber Collection--I don't remember where I found it, but I thought it perfect for this month's holiday.  If this wonderful postcard came from your site, please let me know and I will put in a link to your blog.

In my research about how pumpkin carving got started, I found a fun story--The Myth of Stingy Jack.
The term "jack-o-lantern" came from the fae Irish in the form of a mythical story about a character named Stingy Jack. Jack was a drunkard who, having invited the Devil for a drink, requested the Devil transform himself into money to pay for the drinks. When the Devil did so, Jack took the money and put it in his pocket next to a silver cross. The Devil, unable to transform himself into his original form because of the cross, was trapped.
So Jack made a deal with the Devil--he would not bother Jack and would leave him alone for a year if he was allowed to change back. The Devil, agreeable to this, came back to Jack in a year. However, a year later when confronted by the Devil, Jack tricked the Devil into climbing a tree to pick a piece of fruit. Once the Devil was in the tree, Jack carved a cross in the trunk of the tree, preventing the Devil from descending, until he agreed once again not to bother Jack for another ten years.
When poor Stingy Jack died a short time later, neither God nor the Devil would accept him into their kingdom. But the Devil sent Jack away into the night with only a hot coal to light his way, which Jack put into a hollowed out turnip. Thus began the tradition of jack-o-lanterns.
In the 1800s, Irish immigrants discovered America's native orange pumpkin, which lent itself even better to the tradition of carving out lanterns.
To see more mailboxes and all things postal, visit Gemma at Greyscale Territory for Weekend Mailbox.

Not heard this before, I like stories of tricksters. I will have to look out for the Jack O Lantern.

Pumpkins are much easier to carve than a turnip, I would imagine. Thank you for the scary tale!

That is a cute story, Beth. Never heard it before. Love Halloween! Carol

I'm following today because I enjoy the stories that go with these wonderful images. This one is no exception. Wait until my Irish children hear about Stingy Jack!

That's an interesting story. I had heard part of it before, but not all the details.

I don't know this wonderful story, but I do remember my childhood in Ireland involving laborious carving of turnips. The smell of a candle burning in a turnip is something you never forget. :)

I'll visit everyone later in the week, because we have family staying at the moment. See you all later!

I enjoy the myth of Stringy Jack, I really enjoy reading myths, fables, fairy tales, etc. Thank you for sharing this.

I love this card,and your history lesson is great. One of my favourite holidays.

Wonderful story. I hadn't heard it before either!