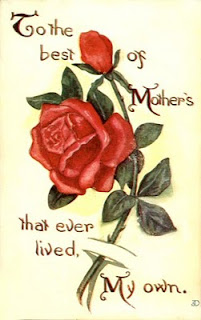 I've always wondered about the history of Mother's Day. I came across this rather sad, yet charming explanation.


Back in the Middle Ages in Europe, children as young as eight or nine would leave home to learn their trade as an apprentice or to become servants in the homes of wealthy people. These children usually were in neighboring towns, but transportation was hard to come by and expensive.

For most of the year the kids did not get to see their families. During Lent, before preparations for the Easter feasts required them to be busy and back at work, the young people would be allowed to return to their homes and families for a weekend. This became known as "going a-Mothering." In the United Kingdom this is known as Mothering Sunday!

Above is the back of this beautiful Mother's Day Post Card. Happy PFF!!

DADDY UPDATE: Dad's appointment with the neck brace folks was disappointing. The brace they had did not fit. There's another they want to try. If that doesn't work, the VA will make another appointment to fit a custom brace. After that, the only option is a risky surgery. Without surgery the muscles in his neck will continue to weaken which, because of broken bones in his neck, is extremely dangerous. Eventually except for the brace, his head would flop to one side. This is a very scary time for my family. We would appreciate your prayers for Dad and for our family.
Posted by Beth Niquette at 6:25 AM

I never knew that about Mother's Day! It is a little sad.

Beautiful card! That's why Mothering Sunday is always changing date, the 4th Sunday in Lent. It causes great confusion in our family because my sons live in France, where it is a different date again. Is it soon in the US?

Mothering Sunday? Not well known in the USA.
I have my post up:
http://viridianpostcard.blogspot.com/2010/04/pff-zion-national-park.html

A lovely rose and a lovely sentiment. Thank you Beth for hosting another round of PFF!

Mothering Sunday has already been and gone in the UK this year. My daughter made a lovely card for my wife and hid it in her room ... unfortunately we've still not managed to find it. I'm sure it will turn up one day

Whilst linky is down, my post for this Friday can be found here

I never knew why Mothering Sunday moved. Thanks for hosting Beth my post is up.

Mothering Sunday! It's a lovely card and a lovely day to celebrate. I'm today with the history of today: http://4.bp.blogspot.com/_72HXHkZzbsg/S34iDdeCpPI/AAAAAAAAD_4/eebDbSeTNpE/S1600-R/untitled.jpg

Or perhaps here is better...http://muse-swings.blogspot.com/2010/04/postcard-friendship-friday-halley-and.html

Thank you for the sad, but very interesting history of Mother's Day.

I'm praying that they will get your dad fitted in a brace that will allow his neck to heal. Hugs to him.

I never knew the origin of Mothering Sunday before. That's a pretty card to give a mother.

Lovely rose. We have had Mothering Sunday in the UK. It is derived from the custom of visiting your mother church on that day (mid lent Sunday) but as you say it was given as a holiday and then children could come home. A bunch of violets is emblematic of this day but your rose is appropriate for I believe the pope used to bless a golden rose.
Hope your Dad finds comfort and healing with his new brace.

All the best to your Dad.
Great card and bit of history. Mine's up now too.

Pray that your father feels better and heals quickly. Much love. Lyneen

happy belated PFF! in italy mother's day used to fall on 8th may but now follows the US tradition...lovely card!