Something to Blame -Postcard Friendship Friday #403 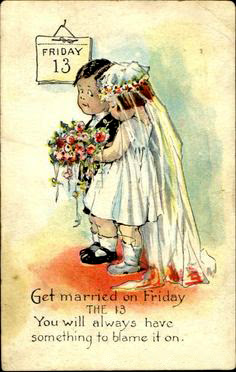 I was happily married for 31 years, and would do it all over again.  SO--I don't need the excuse this funny, clever postcard offers--neither did my Beloved.  LOL Of course our anniversary fell on the 14th...

My husband used to head a "phobialogologist club."  He collected all kinds of phobia words.  LOL  Did you know some people are so afraid of the number 13, they have a condition known as paraskevidekatriaphobia.  Lots of people avoid doing much on Friday the 13th because of its reputation of being a day of bad luck and accidents.   Many high-rise buildings, hotels and hospitals don’t have 13th floors and many airports don’t have gates numbered 13.

We really don't know why this day is believed to be unlucky.  Some think it began with the code of Hammurabi, a collection of legal decisions made by Hammurabi during his reign as king of Babylon in 1729 B.C.E.  These laws were numbered from 1-282, but the numbers 13, 66 and 99 were missing.

Other historians believe the day's reputation originated with ancient Sumerians, who considered the No. 12 “perfect” and the number which followed it imperfect.  Some say its reputation was established on Friday the 13th in October 1307 when France’s King Philip IV arrested hundreds of Knights Templar, then tortured and burned them at the stake.

I am not one for being frightened, or superstitious about this day, but there are plenty of others who are.  SO--lots of blessing and good luck to you today and happy Postcard Friendship Friday!!!

It is funny what people are afraid of. I personally had a great day. Stay safe. Love the postcard.