The Wearing of the Green -Postcard Friendship Friday #398 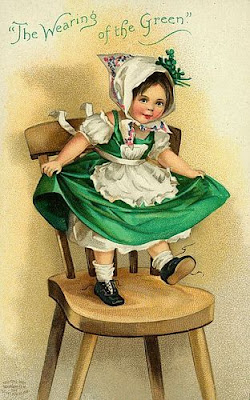 Though this postcard is lovely, the phrase the wearing of the green has a troubled past.  The phrase is actually the title of a street ballad written in Ireland during one of its' darkest times, the Irish Rebellion of 1798.

There are many versions of this song, but the best, it is said, is by songwriter Dion Boucicault, which proclaims "they are hanging men and women for the wearing of the green."

During the uprising, the Society of United Irishmen adopted green as its color.  Folks who supported the rebellion wore green colored ribbons, or rosettes of green ribbon called cockades, worn on a hat as a badge of office, or party.  The punishment for many of those who showed their support was cruel and ruthless.

Though the song below is of later origin than the original, these lyrics vividly describe the sadness and terror in Ireland at that time.

Wearing of the Green

Oh, Paddy dear, and did you hear
The news that's going round?
The shamrock is forbid by law
To grow on Irish ground!
St. Patrick's Day no more we'll keep,
His color can't be seen,
For there's a bloomin' law agin'
The wearing of the green.
I met with Napper Tandy
And he took me by the hand,
And he said, "How's poor old Ireland
And how does she stand?"
"She's the most distressful country
That ever yet was seen;
They're hanging men and women there
For the wearing of the green."
Then since the color we must wear
Is England's cruel red,
Sure Ireland's songs will ne'er forget
The blood that they have shed.
You may take the shamrock from your hat now,
Cast it on the sod,
But 'twill take root and flourish still,
Tho' under foot it's trod.
When the law can stop the blades of green
From growing as they grow,
And when the leaves in summertime
Their verdure dare not show,
Then I will change the color that I
Wear in my canteen;
But 'till that day, please God, I'll stick
To the wearing of the green.

Ireland a country that has known much turmoil! Thanks for sharing!

My goodness, wearing green has taken on a whole new meaning for me, thank you for all your research. Love the postcard.