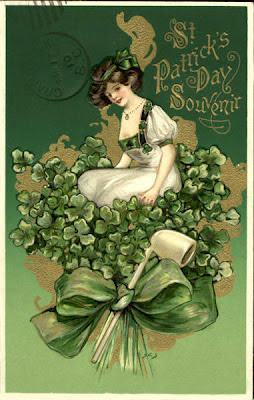 Ever forgotten to wear green on St. Patrick's Day?  When I was in school, if one forgot to wear green that day, one would receive a hearty pinching from just about everyone.  I was spared, of course, because of my green eyes.  (phew)

The tradition of wearing green on St. Patrick’s Day started in Ireland, where party goers believed  leprechauns and other fairy creatures would be given power to pinch anyone they could see.  A person wearing green was said to become invisible to these fairytale critters.

Oddly enough, pinching a person not wearing green on St. Patrick's day isn't an Irish tradition.  Rather, it started in America in the early 1700's.

The tradition reportedly started as a reminder that leprechauns and other fairy folk could sneak up and pinch anyone who wasn't wearing green on St. Patrick's Day.  The catch was, if someone pinched a person wearing green -- then that person had the right to pinch back.   Heh.

I'm SO glad I have green eyes.

Posted by Beth Niquette at 9:38 AM

Lovely St.Patrick's Day card. I got by with the green because my eye color, too! :D :D Happy PFF and thanks for hosting.

It's the first I've heard of having to wear green on St Patrick's Day. My grandmother must have missed that part of my education. :)

Happy St Patrick's Day. The two Irish pubs in the city will be celebrating tonight.

Looks like I had better go change my shirt.

Oh this is a beauty. Thanks so much for stopping by and letting me know how you store your precious collection. I'm actually thinking of starting to mail mine to a niece who is interested.

Thanks for sharing a card with shamrocks. I'm envious. Haven't got one yet.