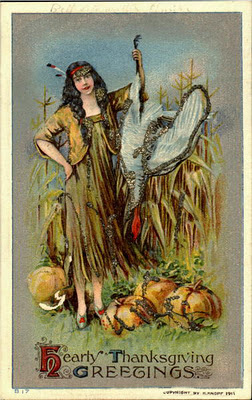 When we traveled the East Coast years ago, we had the opportunity to see Plymouth Rock (much smaller than I’d visualized) and go through the museum in the town of .  It was fascinating.  I learned many things I did not know about the Pilgrims.

The Pilgrims set ground at Plymouth Rock on December 11, 1620. Their first winter was devastating. I was shocked to discover that by Fall only 56 of the 102 settlers survived.  What a lonesome feeling that must have been.  So far from home--with no other resources other than what they brought with them.

Thankfully, the harvest of 1621 was a bountiful one.  The remaining colonists decided to celebrate with a feast - including the Native Americans who had helped the Pilgrims survive their first year. Happily for all, their feast of thanksgiving lasted three days.

Governor William Bradford sent "four men fowling" after wild ducks and geese. History doesn’t say they actually ate turkey, though.  I didn't realize it, but the term "turkey" was used by the Pilgrims to mean any sort of wild bird.  They also ate venison along with boiled pumpkin and a type of fried bread made from the corn they’d planted.  Included in their feast were berries, watercress, lobster, dried fruit, clams, venison, and plums.  Sounds pretty good to me!  Looking back on this past year--there are so many things for which to be thankful.  Happy Thanksgiving, everyone!

Posted by Beth Niquette at 8:43 AM

As usual, Beth, you've chosen a good theme. I figured it would be this Friday rather than the day after Thanksgiving, but I thought I'd hang this one on the wall since I won't be here next Friday.

Happy Thanksgiving to you and yours from me and mine!

Thanks for sharing the freat Thanksgiving postcard. It's not something we celebrate in the UK, but it's great to see everyone's postcards online.

Wonderful post, a beautiful card and a bit of interesting history. Turkeys are fascinating birds, but as a child I thought they were also a bit scary. In a wild park deep down Austraklia there was a wild turkey which suddenly and very fast crossed our path. It was a funny moment. Happy PFF!

The whole Pilgrim story with the origin of Thanksgiving is so interesting. It's good to know what lies behind our traditions.

Lovely card - unusual. It looks as though there is glitter on it.

You have found another super postcard with the pretty harvest lady on it.

Love it. thanks for hosting.

Very interesting post. I love the postcard and the history of Thanksgiving! Helpful, informative, and beautifully written.

That's a great postcard. We don't have a Thanksgiving celebration in Asia but share the happiness of this feast. When I was a kid, I was chased by a turkey and from then on have foolishly avoided contact with this fowl. And I don't eat turkey meat, too. lol.

Happy Thanksgiving to you and yours.

Happy Thanksgiving to you, hubby and family.