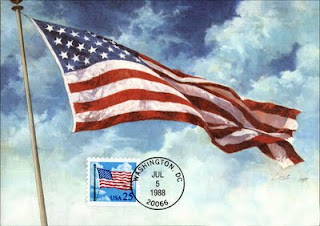 When I was little, I believed flags flown on June 14, were to celebrate the day I was born.  In school, I soon discovered Flag Day actually originated in 1885, by a Wisconsin school teacher, Mr. B.J. Cigrand. This wonderful teacher pushed hard for a special day to celebrate the birthday of the American Flag.
The idea caught on--on June 14, 1889, George Balch, a teacher from New York City, planned Flag 'Birthday' celebrations for the children of his school.  Later on, these celebrations were adopted by the State Board of Education of New York. In 1891, the Betsy Ross House in Philadelphia held a Flag Day celebration and on June 14 of the following year, the New York Society of the Sons of the Revolution, celebrated Flag Day.
In 1914, Franklin K. Lane, United States Secretary of the Interior spoke these stirring words--words he said came from the Flag itself, "I am what you make me; nothing more. I swing before your eyes as a bright gleam of color, a symbol of yourself."
But it wasn't until August 3rd, 1949, that President Truman signed an Act of Congress designating June 14th of each year as National Flag Day.
* Don't forget to visit Gemma at Greyscale Territory for Weekend Mailbox!

NOTE:  You don't have to stick to the theme I chose each Friday.  Just put up the postcards you love and tell us why you like them!  Have fun everyone!

Posted by Beth Niquette at 8:50 AM

I didn't know that there's a celebration for Flag day, although I live in Ohio, in Findlay, considered as The Flag City. :)

I think flags flying for your birthday is the perfect reason! :)

I've been away all this week but I had to pop back just to join in this week.

Have a happy Flag Day birthday, Beth! My daughter turns 60 on the day after Flag Day - where have those years gone? Enjoying the fun postcards and nice people who post them. Carol

I'm taking your word for it - as I remember you telling Tattered&Lost that she didn't need to stick to the theme. SO, this AM I put together my post and waited for you to Open the Ball so to speak. Yours (and the theme) immediately made me remember a little trip I took across the sea. I fly my flag 365 days of the year, day and night. On my front porch.

And thanks again for hosting this little trip through the mail, sometimes with not only a view but a message to 'go with'!

Oh dear, a mistake happened in the system while I has leaving my comment. Don't know if it went or not.

Your card is lovely. Thank-you for the explanation of flag day.

A salute to our American flag (and all that it symbolizes)...
Also, my post has the flag of Pitcairn Islands!
It has the UK flag in the upper-left corner, just like the state of HAWAII!!! Look it up!

That's really interesting. I learn something today. I honor our flag. The flag in the campground where I work is always flying. Back home in the Philippines, we always have a flag ceremony to honor our flag. We do that everyday and all government agencies. I miss the flag ceremony.

That is a gorgeous card!

Lots of history behind flag day.

One of the offices my mom held in the Ladies' VFW Auxiliary was one who saw that schools and organizations had flags. I remember celebrating flag day when I was a kid. Hurray for the red, white and blue!

Today is Philippines' Independence day-- I'm proud to be pinoy. We also specially honor our flag from May 28 to June 12. Happy flag day to you too.

How do you get your blog title to have a sort of white glow behind it so it doesn't blend in with the header photo?

Happy Birthday (belated!) and Happy Flag Day. I always liked the comment "let your freak flag fly", but then I went to college at UC Berkeley, and "freak" wasnt' a negative term.

Thank you- I was just frustrated with getting my blog header right and saw that yours could be clearly read.