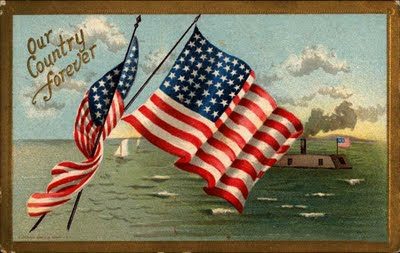 Armed Forces Day in the United States, salutes men and women of every branch of military service. These brave individuals are often called upon at a moment's notice to perform risky and perilous missions for Freedom and country.  There are courageous men from every generation of my family's history, who fought valiantly for Freedom.  I am deeply grateful for their sacrifice.
Up until the 1950's, each branch of the American military had their own day of celebration.   But on August 31, 1949,  Secretary of Defense Louis Johnson announced the creation of Armed Forces Day.  This new holiday consolidated honoring the Army, Air Force, Navy, Marine Corps and Coast Guard into one fabulous celebration.   On February 20, 1950, President Harry Truman proclaimed Armed Forces Day as a national holiday. All branches of American military celebrated the first Armed Forces Day on May 20, 1950.

I intend on calling my Dad today--to thank that grand old soldier for his personal sacrifice and bravery.  In WW2, Dad was captured by the Nazis.  He survived months of captivity in one of the worst Nazi war camps on record--he barely made it out with his life.  He is our hero.
Happy Postcard Friendship Friday!
* Don't forget to visit Gemma at Greyscale Territory for Weekend Mailbox!

Posted by Beth Niquette at 8:00 AM

Thank you for reminding me, I have to call my dad in law who served in Vietnam War,and my bro-in-law who also served in Iraq for two years.
Salute to all of them!!!

Great idea to have as special day. That is a strange ship, is it lying low in the water, living in a town that builds submarines, I don't think they had funnels, or if they did may have been a design flaw:-)

Thank you for reminding me of Armed Forces Day. My father served in the army in WW2 in the south pacific. Wonderful post!

I love flag cards and that one is a beauty.

I don't think we have an Armed Forces Day over here, but my son is serving in the Royal Navy so I am a very prous Mum.

Well guess what? I'm with the theme today! Great card, Beth, and thank you once again for being a gracious hostess!

And thank your Dad for his selfless service. It's high time to thank all our WWII veterans before it is too late.

Wish your dad a grateful thank you from me too!

Your Dad is my hero too! As are all of those who have served!

I didn't know about this day, Beth, so I'm interested to read about it. I think in the UK we roll it all together into Remembrance Day.

I'm away this weekend but I will be back soon and visit everyone. :)

I just happened upon your blog. I had forgotten all about Armed Forces Day. But I grew up with on Air Force Bases, as my Father was in the Air Force. So it was a big deal in my life. Thank you for the memory. I am reading Unbroken about a man in a Japanese POW camp and for the first time I can understand what you Father must have gone through. He is everyone's hero. My Father too.

LOVE YOUR POSTCARD... Looks like the USS Monitor from the Civil War in the background.... this is a treasure. Thank you to all who have served this great country of ours. Happy PFF!