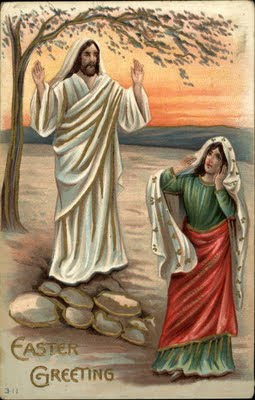 Can you believe I have been hosting Postcard Friendship Friday for 60 weeks now?!  It feels I began hosting PFF just yesterday.  I'm so grateful to all of you for your participation.

Since it is Easter Weekend, I decided to share one of my favorite stories from the Bible.  What joy Mary must have felt when she heard her dear Friend call her name.
Early on the first day of the week, while it was still dark, Mary Magdalene went to the tomb and saw that the stone had been removed from the entrance. So she came running to Simon Peter and the other disciple, the one Jesus loved, and said, “They have taken the Lord out of the tomb, and we don’t know where they have put him!”
So Peter and the other disciple started for the tomb. Both were running, but the other disciple outran Peter and reached the tomb first. He bent over and looked in at the strips of linen lying there but did not go in. Then Simon Peter came along behind him and went straight into the tomb. He saw the strips of linen lying there, as well as the cloth that had been wrapped around Jesus’ head. The cloth was still lying in its place, separate from the linen. Finally the other disciple, who had reached the tomb first, also went inside. He saw and believed. (They still did not understand from Scripture that Jesus had to rise from the dead.) Then the disciples went back to where they were staying.
Now Mary stood outside the tomb crying. As she wept, she bent over to look into the tomb and saw two angels in white, seated where Jesus’ body had been, one at the head and the other at the foot.
They asked her, “Woman, why are you crying?”
They have taken my Lord away,” she said, “and I don’t know where they have put him.” At this, she turned around and saw Jesus standing there, but she did not realize that it was Jesus.
He asked her, “Woman, why are you crying? Who is it you are looking for?”
Thinking he was the gardener, she said, “Sir, if you have carried him away, tell me where you have put him, and I will get him.”
Jesus said to her, “Mary.”
She turned toward him and cried out in Aramaic, “Rabboni!” (which means “Teacher”).
Jesus said, “Do not hold on to me, for I have not yet ascended to the Father. Go instead to my brothers and tell them, ‘I am ascending to my Father and your Father, to my God and your God.’”
Mary Magdalene went to the disciples with the news: “I have seen the Lord!” And she told them that he had said these things to her.  John 20:1-18 (NIV)
Happy Easter and have a wonderful Postcard Friendship Friday.
* Don't forget to visit Gemma at Greyscale Territory for Weekend Mailbox!

Posted by Beth Niquette at 6:49 AM

have a very happy easter beth! here's to another year of PFF...!

Happy Easter to you, too, Beth. I miss the Lenter and Easter back home. Cheers to being the PFF host, and wishing more years to come. My entry this week is not Easter-related, but a bit more about Earth Day. So, Happy Earth Day to you, as well.

Wishing you a very happy Easter. We're having beautiful weather here and it's lovely to see all the families out making the most of it.

Is it really so long that you've been hosting? Time flies. :)

What a BEATUTIFUL card! Have a happy Easter!

beautiful postcard! I love that Jesus appeared to a woman first. ~sigh!

Many religious scholars say that the language that Jesus Christ spoke was Aramaic.
Since Jesus did not speak English, they say that his name was Yeshua, or Yehoshua.
"The English name Jesus derives from the Late Latin name Iesus, which transliterates the Koine Greek name Ἰησοῦς Iēsoûs.
In the Septuagint and other Greek-language Jewish texts, such as the writings of Josephus and Philo of Alexandria, Ἰησοῦς Iēsoûs is the standard Koine Greek form used to translate both of the Hebrew names: Yehoshua and Yeshua."
"Yeshua, spelled יֵשׁוּעַ (Yēšūă‘) or ישוע in Hebrew, was a common name among Jews of the Second Temple Period, and is thought by scholars[1][2] and religious groups[3] to be the Hebrew or Aramaic name for Jesus."
http://en.wikipedia.org/wiki/Yeshua

As usual Beth, you've posted a beautiful card, and the story is always beautiful.

We are going to Church in a couple of hours and I'll come back to visit all the other participants in this week's postings.

Have a Blessed and Happy Easter.

Happy Easter everyone. As I wasn't sure where I'd be this weekend I posted my Easter cards last weekend, so instead have shared a few from somewhere we just spent the last week on holiday, c.1915.

Have a Happy Easter!!!

You've been a great hostess,thank you. This is a wonderful card. Happy Easter.

that is a stunning card Beth, truly beautiful :)
wishing you a lovely Easter holiday, I know it will be special for you and full of many blessings...hope your kitty is still making you happy too. HAPPY EASTER & HAPPY SPRING
XOXOXOXO

Happy Easter to you and your family. Becky's surgery is set for Monday at 1pm. This specialist does robotic type surgery and he thinks he can save 2/3 of her kidney. She won't be able to eat anything tomorrow, only liquids and then she has to take several different things to makes sure her colon is cleaned out, apparently he does the surgery with about five little incisions and they have to move the colon over to work at the kidney. She doesn't eat meat anyway, and everything else she can eat the next day or two. Doctor says if all goes well, she'll go home the next day, which I find unbelievable.

Dearest Beth,
Stopping by to wish you a blessed and blissful Easter! May it be filled with much sparkle!